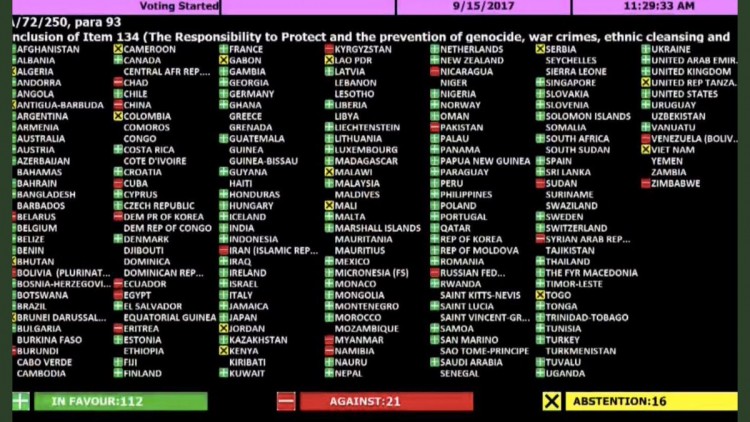 Maldives voted against including a supplementary item ‘The Responsibility to Protect and the prevention of genocide, war crimes, ethnic cleansing and crimes against humanity’in its formal agenda at it

President Abdulla Yameen has said it is the international community’s responsibility, to help the Rohingya Muslims, who are described as ‘the world’s most persecuted minority group’.

He made the comment in his message to mark the beginning of the Islamic year 1439, where he highlighted that the “anti-humane acts” that are being carried out against the Rohingya Muslims.

While this is the first time the President had commented on the matter, Maldives was one of the first countries to take action against Myanmar following the influx of violence against the Rohingya Muslims by the Burmese Army, immediately cutting off economic ties with the country. Cutting of all ties would lead to the inability to take part in any discussions regarding Myanmar.

While this was somewhat “impressive,” Maldives’ decision shortly after, not to send a representative to an important vote at the 72nd United Nations General Assembly, had led to fierce criticism from the opposition and public. The vote was to include a supplementary item “The Responsibility to Protect and the prevention of genocide, war crimes, ethnic cleansing and crimes against humanity” in its formal agenda.

Australia’s Ambassador to the UN, Gillian Bird, who along with Ghana initiated the vote, emphasized that “the only objectives of including it on the agenda was to foster dialogue and build consensus on what the United Nations and Member States could do to prevent genocide, war crimes, ethnic cleansing and crimes against humanity“.

The item was passed with 113 votes in favor, and 21 against. There were 16 abstentions.

Following the backlash, the Permanent Mission of Maldives to the UN quickly sent out a tweet saying that the vote had been “a procedural vote to include R2P in the 72nd UNGA,” and emphasized that it was “not about Rohingya Muslims“.

Contrary to reports by some, the vote today at UN was a procedural vote whether to include R2P in 72UNGA, and not about Rohingya Muslims

The next day the Ministry of Foreign Affairs released a statement, only in Dhivehi, responding that the reason it did not partake in the vote was “because it eroded sovereignty”.

Noting that the vote held on September 15 “had nothing to do with Myanmar conflict directly,” Maldives’ permanent representative to the UN, Dr. Ali Naseer gave an interview to the state broadcaster, saying that the Maldives “is working with the UN in other ways to help the Rohingya Muslims”.

So the Maldives chose not attend the particular UNGA meeting, emphasizing that Rohingya Muslims were not even mentioned in the vote, which in turn meant the item was not relevant to them, right?

It is true that “Myanmar”, “Rakhine State” or “Rohingya Muslims” cannot be seen anywhere on the three-page agenda published on the UN’s official website, which is accessible to anyone; probably because it is not the only nation where such atrocities are being committed. However, it noted that “a general assembly debate would allow all Member States to record their views on the responsibility to protect”, and that “this should in turn enable Member States to find more common ground in relation to how best to prevent genocide, war crimes, ethnic cleansing and crimes against humanity”.

Hence, by not even showing up for the vote, the Maldives had said “no” to even a discussion on the issue.

Despite the fact, President Yameen on Thursday, stated that it was the international community’s “responsibility to help them and resolve the pressing issue”.

The same message by the President was published in Dhivehi as well. And as per usual in such cases, it differed a bit from the English one.

Does the same man who refused to vote to even allow member nations to even discuss the issue, saying that the R2P principle allows powerful nations to intervene in a country’s domestic affairs, now criticizing the international community for not doing so.