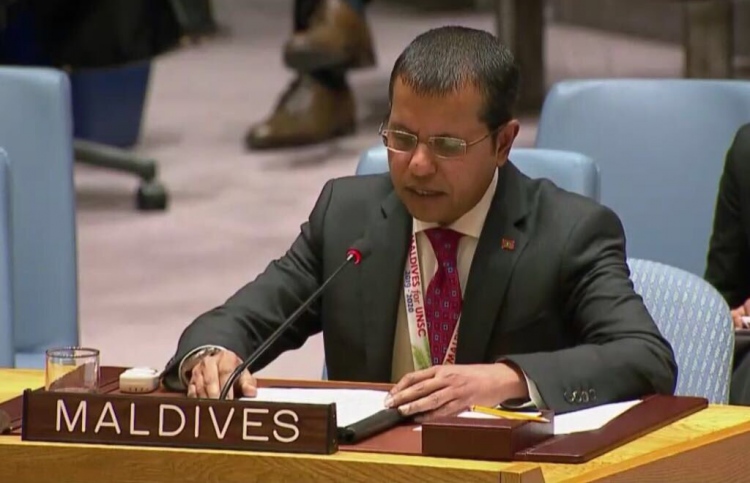 Maldivian ambassador to the UN, Ali Naseer Mohamed, speaks at a UN sitting.

The Maldives has co-sponsored the United Nation’s resolution, which will be submitted to its General Assembly on Thursday, to reject US president Donald Trump’s recognition of Jerusalem as the capital of Israel.

In a tweet, the ambassador and permanent representative of the Maldives to the UN, Ali Naseer Mohamed, stated, “Jerusalem will take centre stage at UNGA today #Maldives co-sponsored Resolution declaring null & void any action to alter the status of the Holy City. The Maldives will deliver a statement at the Session reiterating its position that East Jerusalem as the Capital of Palestine”.

Following Trump’s announcement to officially recognize Jerusalem as the Israeli capital and move the US Embassy to the Holy City on December 6, the Maldives along with several other nations stood up against the US’ move, raising fears that it would trigger more violence in the Middle East.

Condemning the move, the Maldives warned that the US’ decision will have dire consequences on the region’s future peace, security and stability. Noting that the establishment of two states for Palestine and Israel is pivotal to end the bloodshed and bring about lasting peace, the government also declared Israel’s illegal occupation and resettlement projects are in violation of all international laws and UN Security Council resolutions.

Earlier this week, the US had vetoed a draft resolution at the UN Security Council which rejected Trump’s recognition of Jerusalem, after all the other 14 council members backed the measure.

Moreover, Trump on Wednesday threatened to cut funding for all the countries that back the motion at the General Assembly, saying, “Well, we’re watching those votes. Let them vote against us. We’ll save a lot. We don’t care.”

According to AFP, the draft resolution mirrors the vetoed measure, reaffirming that any decision on the status of Jerusalem has no legal effect and must be rescinded. While some diplomats expect countries like Canada, Hungary and the Czech Republic to bend under US pressure, the majority of the nations are expected to support for the resolution, which is non-binding.