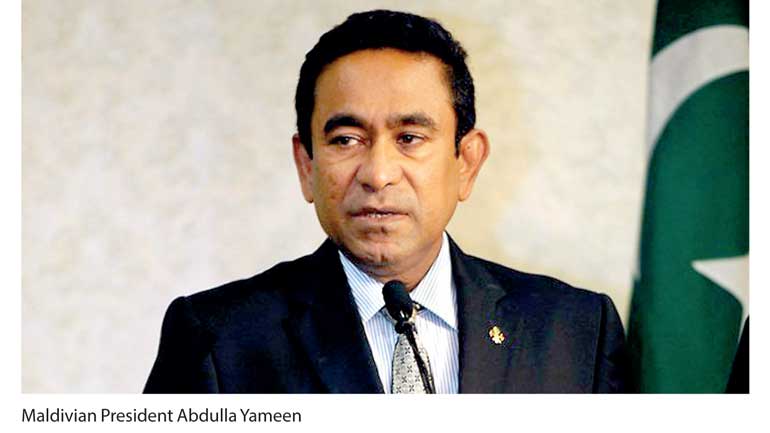 The Maldives-China Free Trade Agreement (MCFTA) which was passed by the Maldivian Parliament recently is likely to be signed during Maldivian President Abdulla Yameen’s three-day visit to Beijing which begins today, 6 December, a Maldivian official said.

A brief note issued on Monday said the trip will take place from 6 to 9 December.

“High-level discussions with top Government officials and stakeholders of China will take place on 9 December, at the invitation of President Xi Jinping. During the visit, a number of agreements on bilateral cooperation will be signed,” the note said.

Maldivian official sources said that the FTA would be one of the agreements to be signed.

Not to affect India

“Maldives had to look to China because the European Union had stopped its GSP Plus concessional duty facility to it on account of the country’s becoming a middle-income country. Without GSP Plus, Maldivian fisheries products are now paying 25 to 26% duty to enter Europe,” Shainee pointed out.

Asked if Maldives would not be flooded by Chinese goods, exponentially increasing the trade deficit and causing loss to the country in terms of customs duty if Chinese goods also entered the country at low or zero duty, Anil said that Chinese goods would be necessary to carry out the many infrastructural and modernisation projects planned by President Yameen.

“A lot of machinery and technical equipment would be required,” Shainee said. “Extensive infrastructural work would have to be carried out to diversify the Maldivian economy and release it from overdependence on fishing. Besides, the country needs more and better resorts to increase tourist arrivals from the current 1.5 million per annum to about seven or eight million per annum.”

“President Yameen has set a target of 50 more resorts to be built by 2018 end. Thirty-eight have already been built. We have seven regional airports but we need many more to transport tourists, goods and services,” he added.

The MCFTA has no Non-Tariff Barriers (NTB), Minister Shainee said.

The Minister further said that the infrastructure projects were also meant to give jobs to Maldivian youth, and this was tied to the security of the country as a well-educated and well-employed youth population would not take to violence.

Ambassador Shareef said that much of the criticism of the Maldives-China FTA was based on geopolitical apprehensions about China. He pointed out that there were two foreign-funded $ 1 billion projects now on in Maldives, “one is Thai and other is Chinese, but only the Chinese project is noticed and commented upon”.

The envoy made it clear that the deals with China were purely commercial and given the Maldives’ thirst for development and President Yameen’s zeal for fast and time-bound development, there was room for investors from all countries, both from the South Asian region and outside.

On the criticism that the MCFTA was rushed through the Maldivian Parliament in less than an hour, Maldivian Ambassador Mohamed Hussain Shareef said that the Opposition had been boycotting Parliament.

“If the Opposition had any issues with the FTA, they could have attended Parliament and opposed it and tried to defeat it. But they do not attend sessions, and even if they do, they disrupt and walk out,” Ambassador Shareef pointed out.

Security ties only with India

The envoy went on to say that while Maldives may have commercial and economic relations with many countries when it comes to security, ties would be only with India and Sri Lanka.

“When it comes to security in the Indian Ocean region, it is between the Maldives, India and Sri Lanka. No one else is welcome, be it friends from the East or West,” Shareeef during the meeting with foreign media here on Monday.

Ambassador Shareef said that former President Mohamed Nasheed, the Jumhoori Party Leader Gasim Ibrahim, and Sheikh Imran, Leader of the Adalaath Party, could not contest the September 2018 Presidential election because they did not qualify under the constitution of the country.

According to Maldivian law, no one who had been convicted and sentenced to a term of more than 12 months in prison can contest elections unless three years have passed after release, and there is an age bar too, with the cap being put at 65 years.  Nasheed was sentenced in 2015 to 13 years in jail for abducting a judge, and Gasim Ibrahim was sentenced this year to more than three years in prison for attempting to bribe Parliamentarians to vote in favour of an impeachment motion against the Speaker of Parliament. He is also over the age limit of 65.

The Adaalath Party Leader, Sheikh Imran, cannot contest because he has been sentenced to 12 years in prison for a bid to overthrow President Abdulla Yameen by violence. In September 2015 there was an explosion on a speedboat in which Yameen was travelling. Later it was found that the explosion was set off by a bomb.

The Maldivian officials pointed out that the existing Maldivian system had been magnanimous enough to allow Nasheed and Gasim Ibrahim to go abroad to avail of medical treatment, but instead of coming back and completing their sentences they had been overstaying overseas (Nasheed in the UK and Gasim Ibrahim in Singapore and Germany) as fugitives from justice and plotting to overthrow President Yameen.

2018 elections will be held

On the doubts raised by former President Maumoon Abdul Gyoom about the presidential election not being held as per law in 2018, the Attorney General said that polls would be held and would be “free and transparent”. He recalled that in 2014 elections to Parliament were held. Later local bodies elections were also held, both certified by local and international observers as having been free and fair.

On the charge that many MPs had been ousted from Parliament for changing parties, Attorney General Anil said that the Supreme Court had ruled that an MP elected to be part of a particular party cannot betray his electors by changing sides after election. Changing parties after elections should lead to the forfeiture of membership of Parliament, the court had said.

On the charge that human rights violations were rampant under Yameen’s dispensation, Attorney General Anil said that this was baseless because cases of violation were being investigated and arrests and prosecutions were taking place.

The Maldives has ratified seven out of nine international human rights conventions, but some like the one on religious freedom cannot be ratified as the Maldives is an Islamic country with its laws being in tune with Sharia, the Attorney General said.

With regard to the media, Anil pointed out that one look at the coverage would show that there were plenty of stories which were critical of the Government.