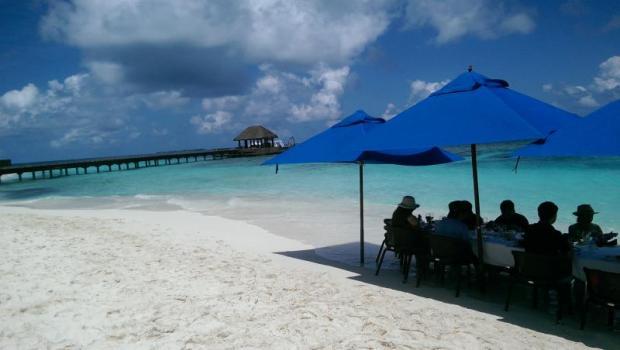 Maldivian officials are calling for Thai investors, especially in hospitality and infrastructure, to strengthen its long-term economic growth.

Tourism and Sports Minister Kobkarn Wattanavrangkul said the Maldives government has invited foreign investors to build hotel and resort destinations, entertainment venues and integrated tourism facilities at 50 islands over the next five years.

Mrs Kobkarn said that 20 of the 50 islands have been targeted by foreign investors, including those from Thailand.

The Maldives boasts 360 islands, many with untapped potential for resorts and other attractions. Last year, the Maldives welcomed 1.3 million international tourists. Authorities there are seeking to attract more visitors, but have been hampered due to limited accommodation capacity.

More than 60% of foreign exchange receipts in the Maldives are from the tourism sector, followed by exports. Some 90% of tax revenue there comes from import duties and tourism-related taxes.

“Maldivian officials have invited the Tourism and Sports Ministry to visit the country, saying it wants more Thai investors to open hotels or invest in infrastructure and construction because the country is working toward long-term growth. They also want to exchange and learn from Thailand’s tourism successes,” she said.

Chaiyapat Chaturongkul, director of business development at Singha Estate Plc, said the company will spend 51 billion baht on a project in the Maldives consisting of hotels, duty-free shops, a convention hall, a marina and entertainment complexes.

The real estate development arm of Boon Rawd Brewery reached the deal with the Maldivian government in 2013, with a 99-year concession contract. It is one of the most expensive development projects in the country.

“It only takes four hours to fly from the Maldives to Thailand, Singapore and the Middle East, and seven hours to Europe and China, so our project easily links with those regions and can bring in a lot of tourists to the Maldives,” said Mr Chaiyapat.

“We do not intend to build a super-luxury destination like many other players. Instead, we will go with products that can serve all markets. China is one of our target markets.”

The first phase of the project is set to be completed this year and the second phase is slated for 2022.

SCG, Prueksa and the Pizza Company have also entered the Maldivian market.

Thai and Maldivian officials have been hammering out a framework on cooperation to drive bilateral tourism.

Mr Zameer said authorities plan to spend 170 billion baht to build and improve infrastructure there over the next five years.

Major outlays include 34 billion baht for the expansion of Velana International Airport, set to be complete in 2019; 8.5 billion for the first bridge that will link Male Island and Hulhule, where the airport is located; and 5.2 billion for basic infrastructure and other services.

When the airport overhaul is completed, air capacity will increase from 1.5 million passengers per year to 7 million.

The remaining funds are for the development of a new town called Hulhumale, which will boast an industrial zone, seaport, sports complex, water park residential accommodations and other facilities.

The Maldivian embassy in Bangkok is scheduled to open in Bangkok this month, which will further help boost bilateral tourism.

Thailand and the Maldives have formed a joint strategic partnership to strengthen tourism connectivity, aimed at promoting the “Two Countries, One Destination” programme.

Other joint marketing campaigns will be launched to attract more visitors from Asean to both countries. The Tourism and Sports Ministry will also promote U-tapao airport to further network expansion.

Meanwhile, seaplane operators in the Maldives will be asked to invest in major tourists destinations in Thailand such as Phuket and Pattaya.

“Many resorts and hotels in Thailand offer a variety of spa and health services, including traditional Chinese medicine, Thai herbal massages and health management programmes,” she said.

Thailand is the fourth-most popular destination among Maldivians after Sri Lanka, India and Malaysia.

“We hope to see growth in the years ahead as we refocus on our strategy of focusing on quality, not quantity, and making significant improvements in our products and services to enhance visitor satisfaction,” said Mrs Kobkarn.

Last year, international visitors to Thailand totalled 32.6 million, up 9% year-on-year. This generated more than 2.5 trillion baht in tourism revenue, a 13% increase from 2015. Thailand aims to attract 34.5 million tourists this year. 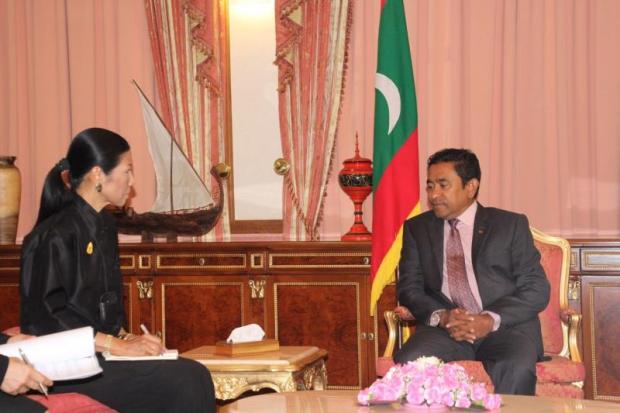 Mrs Kobkarn meeting with Mr Gayoom during her visit to the Maldives last week.