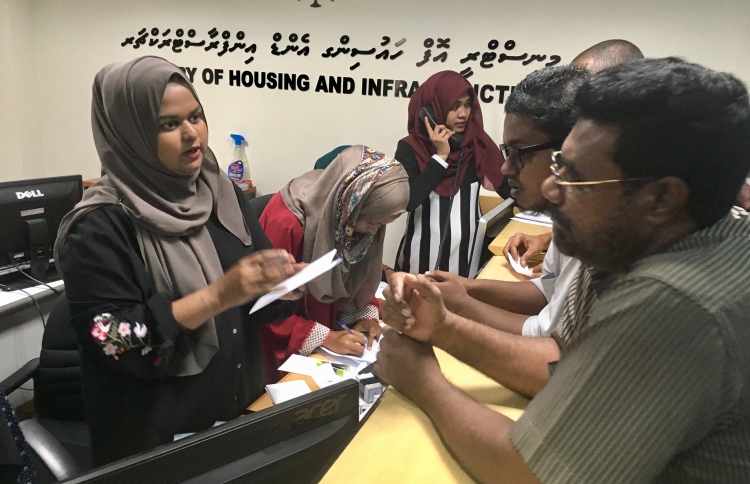 A man files a complaint at the housing ministry regarding the distribution of flats in the government’s first social housing project. PHOTO: NISHAN ALI/MIHAARU

The government late on Tuesday night released the final list of flat recipients from its first social housing project, which has been steeped in controversy.

Nearly four years after 15,000 hopefuls applied to buy flats from the government’s first housing project in reclaimed suburb Hulhumale in 2014, the Ministry of Housing and Infrastructure had finally announced 661 recipients from Categories 1 and 2 earlier this month. However, the ministry has withheld the recipients’ identities and how points were allocated among the applicants, revealing only the form numbers of recipients, which sparked public outrage as people called foul on the flat distribution.

The housing ministry did not reveal whether it has responded to official complaints filed by spurned applicants, or if any changes have been made to the final list of recipients. The ministry’s media consultant Ahmed Fazal said that Housing Minister Dr Mohamed Muizzu will disclose further details at a press conference that will be held Wednesday afternoon.

In a notice released Tuesday night, the ministry said that the final list with the form numbers of confirmed flat recipients has been put up on the ministry’s noticeboard and on its official website.

The ministry further declared that it will make final checks on the recipients’ living conditions, as well as the living conditions of their parents and spouses, before signing any agreements. It added that if two flat recipients turn out to be spouses, the duo will receive a single flat.

Meanwhile, following a petition submitted by three lawmakers of main opposition Maldivian Democratic Party (MDP), the parliamentary Committee on Oversight of the Government had ordered the ministry to inform the committee on how flats were distributed. The housing ministry sent the relevant information to the committee on Tuesday.

The issue of the controversial flat distribution has also been filed at the Anti-Corruption Commission for probe.