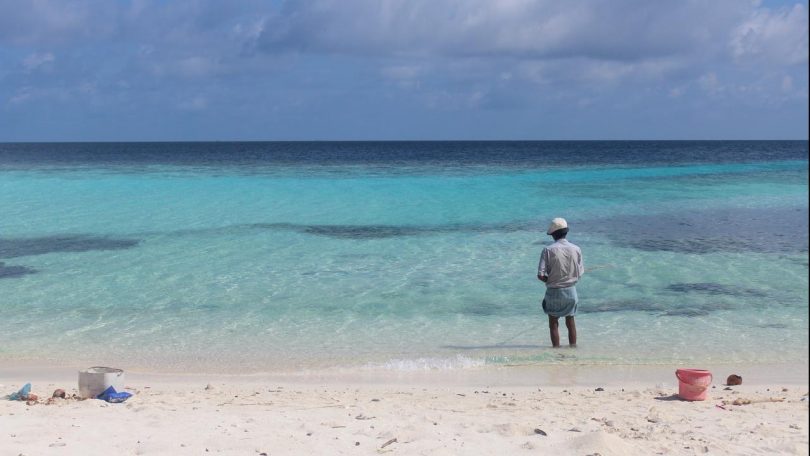 Among the Maldives are local islands revealing a traditional lifestyle rarely seen by tourists.

The sign on the little white and blue painted school says it’s committed to bringing up students to love Islam, to be disciplined and to develop the country honestly.

I hope the children aren’t too hot to smile because it’s a struggle for me. Despite the heat, women waft through the island’s empty, dusty streets like heavy black ghosts in their traditional Islamic dress. I figure they’re used to it.

If I’d been dropped into this place from the air, I’d think I’d landed in the Middle East. But I’m around 3000km away from there, on a tiny island in the Indian Ocean that’s simultaneously a conservative Islamic stronghold and a decadent paradise for wealthy foreigners.

I wonder what these villagers on the tiny Maldivian island of Dhevvadhoo think of the nearby luxurious island resorts that welcome close to one million holiday seekers every year, and account for around 30 percent of the country’s per capita GDP.

“A lot of people work in tourism and we are very happy to work in those resorts,” says Mohamed Jaleel Moosa, our guest service agent at the stunning Outrigger Konotta Maldives Resort nearby, who is showing us around the island.

“We get decent pay and food and accommodation is arranged by the company and they cover our medical expenses too.”

Dhevvadhoo is Sunday-quiet on this Monday lunchtime. Giggling young kids play on the streets during school’s lunch break, their white uniforms neat and pristine, while others walk along with black-clad women under umbrellas for shade.

There are hardly any youths of university age here (many go to the Maldivian capital Male or overseas to study) and there are few men of working age – they’re mostly either working in the resorts or fishing, both of which can require them to be away for weeks at a time.

The Maldives is a country that has relied on the ocean since ancient times when it was famous for its dried fish, ambergris and its cowrie shells, which were used as currency across the Indian Ocean. These days, fishing for export may account for around 10 percent of GDP but the country’s picture-perfect oceans remain its riches.

Dhevvadhoo’s dusty streets are long and straight and at the end of each one is the ocean. It’s perfect. And allows any sea breeze to blow through the island.

It’s hard to gaze at this turquoise wonder and not jump in. If I lived here I imagine waking to a blissful ocean dip and cooling off in the water at the end of the day. But Jaleel tells me the locals barely swim.

“They usually only swim at weekends,” he says. “In their clothes. They must stay covered.”

Tradition on local Maldivian islands has deep roots. We wander past a mosque outside of which intricate Islamic carvings on stone graves hundreds of years old have crumbled away. Walls of ancient grey coral here also crumble. They’re the old houses, too shameful to live in now we’ve learned that coral must stay in the sea.

Modern Dhevvadhoo is a happy, colourful place, where everyone has time for a chat. Wireframes holding rope-net seats are placed along the streets, in case locals care to rest in the shade of a Panama berry tree. Cooking seems to be a slow, repetitive ritual – “mostly we have tuna, coconut and rice for three meals,” says Jaleel. Sweet smells waft out of doorways, where on the doorsteps clear plastic bottles of coloured water – bright green, red or blue – aim to reflect light at night and scares cats away.

Many of the houses are resplendent in pink, blue or yellow pastels, but the shine is taken off when it’s revealed the colours denote the inhabitants’ political leanings. “Does this cause tensions among the neighbours?” I ask Jaleel. He chuckles. “Sometimes”.

Political turbulence in the Maldives infiltrated foreign news in 2017 when demonstrations in Male became violent. The country is currently in the grip of a strategic power play, with the relatively hardline President Abdulla Yameen accused of reversing years of democratic progress.

Jaleel seems reluctant to criticise his president and when I ask about how strict his country is, he shrugs.

“Maldivian life is simple and traditional. There are certain rules we need to follow and from the beginning, we are very disciplined by our parents,” he says, as I remember the school’s strict slogans.

But times here are changing, he says. For example, young people like him are not having arranged marriages, but are marrying though love. And most only take one wife these days (“two is too expensive!” he laughs). And with alcohol prohibited and a lack of pub culture to bring young people together, many are relying on dating apps to find love. I wonder how this would work on islands like these – everyone on it you would know; those elsewhere are across the ocean.

In today’s world, geography doesn’t halt progress. Even on this remote, southern tip of the Maldives, kids cycle along with the latest iPhones in hand. The ramshackle food shops are stuffed with western brands.

Most striking is a graffiti wall just 100 metres along from Sulthan Mohamed School. While nearby students are taught to respect the rules of Sunnah, a quote on the wall urges us to “think outside the box!” And beside the compulsory yin and yang and ganja leaf symbols, a Jimi Hendrix quote reads clear: “you have to go and be crazy. Craziness is like heaven”.

We wander down to a desert island beach where an old man in his lungi, shirt and hat is trying his luck with a rod on the shoreline. I consider how lucky he is to see his life wind down somewhere this beautiful. But it’s never that simple. Strewn across the beach is rubbish – the island’s waste management is very poorly organised, Jaleel tells me.

Dhevvadhoo may be an Islamic fortress but life and the outside world drift around it and wash into it as bottles and jars on the white sand, and as dating apps and romantic opportunity through the island’s towering satellite pole.

And with two very different kinds of waves lapping at this peaceful island citadel, I wonder, will they erode the walls?