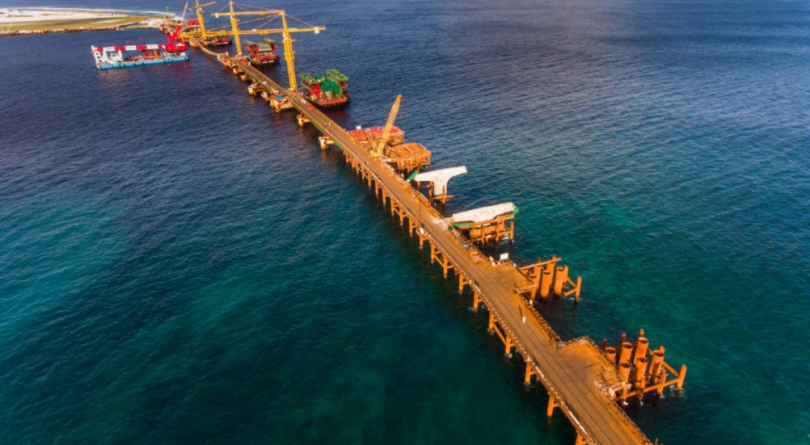 The landmark bridge being developed between capital Male and airport island Hulhule is “designed to be safe in stormy weather”, proclaimed Minister of Housing and Infrastructure Dr Mohamed Muizzu as he hit back at speculations raising doubt over the true quality of the bridge.

The public began to buzz after a video was uploaded to social media, which depicted huge waves washing over the platform of a bridge which was alleged to be the China-Maldives Friendship Bridge currently under construction. People on social media raised questions, expressing scepticism regarding the safety of the most ambitious infrastructural project undertaken by the Maldivian government.

Housing Minister Muizzu was quick to rebut the rumours, stating in a tweet Saturday, “One needs to differentiate between trestle bridge & actual bridge; the latter several metres higher & designed to be safe in stormy weather.”

A few hours after his first declaration, Minister Muizzu took to Twitter again and stated that the video in circulation, which claims to be of the China-Maldives Friendship Bridge, shows a different bridge entirely.

In his tweet, the minister shared the latest pictures of the Male-Hulhule bridge, backing his claim that the video is not of the Maldives’ landmark venture.

He also condemned the person or persons responsible for circulating the video clip, saying in local Dhivehi language, “Using a video of another country’s bridge to create doubt over CMFB (China-Maldives Friendship Bridge) is an irresponsible act.”

Mihaaru has found out that the video on social media is, in fact, footage of the Minicoy Eastern Jetty in Minicoy Island of Lakshadweep.

China-Maldives Friendship Bridge’s development is currently at the stage of placing I-beams along the platforms, which marks the beginning of laying the bridge’s superstructure.

The total expense of the project amounts to USD 200 million out of which USD 116 million is provided as free aid by the Chinese government. China has also loaned USD 72 million while the Maldives’ government is bearing USD 12 million of the project.