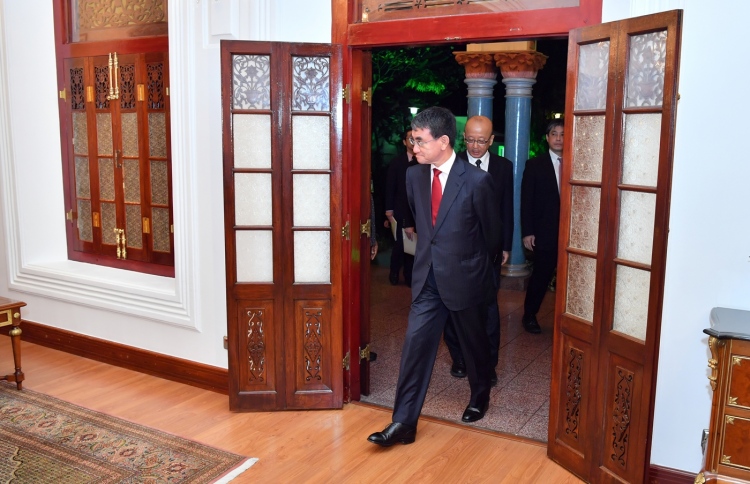 Japan wished to see the Maldives progress in all areas, and strengthen bilateral relations with the island nation, stated the government of Japan on Saturday.

Speaking to the press regarding Japanese foreign minister Taro Kono’s official visit to the Maldives, the deputy press secretary of Japan’s foreign ministry, Toshihide Ando, declared that Japan was resolved to maintain its 50-year diplomatic ties with the Maldives.

According to Ando, the government of Japan was looking to enhance its relations with the archipelago in various areas, including tourism, environmental issues, natural disaster prevention, sports, and culture.

In response to an inquiry regarding Japan’s outlook on the free trade pact recently signed between the Maldives and China, Ando cryptically replied that the Japanese government was working to strengthen economic relations with the archipelago as well. He stated that the Maldives must do what needed to be done in order to advance its economy.

Ando also expressed Japan’s interest in cooperating with the Maldives in maritime security.

Shedding light on the talks that were held between officials of the foreign ministries of both nations, Ando further disclosed that both governments had agreed on sanctions to be placed on North Korea, in the midst of the high tensions between the latter and Japan.

Taro Kono’s one-day stay marked the first visit to the Maldives by a foreign minister of Japan. He had paid a courtesy call on President Abdulla Yameen and headed the Japanese delegation during the bilateral discussions with the Maldives’ foreign ministry. He ended the visit and returned to Japan late on Saturday night.