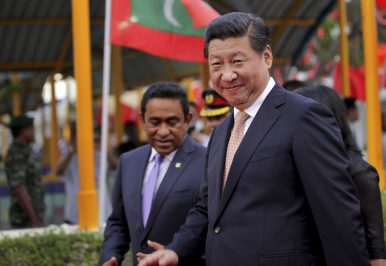 Maldives is the smallest nation in South Asia in terms of population, area and GDP. Yet in August 2017, it defied India, the regional power, by permitting three Chinese warships to dock in Male. The Beijing-Male axis began when Chinese President Xi Jinping visited Male in September 2014, during which Beijing secured Maldives’ agreement to become part of China’s Maritime Belt and Road Initiative, much to New Delhi’s consternation.

In return, Beijing made large investments in infrastructure projects in Maldives, including the China-Maldives Friendship Bridge between the airport located in Hulhumale and Male. When Maldives cancelled its agreement with the Indian company, GMR Male International Airport Limited (GMIAL), to modernize and operate its international airport for 25 years, GMIAL took the case to an international arbitral tribunal, which ordered that GMIAL be paid $270 million in compensation. This was paid promptly by the Maldives government, but India suspects China put up the amount.

More worrying for India is China’s presence on Maldives’ northernmost atoll, sitting in the middle of the busiest transit point between the Middle East and Southeast Asia. By extending loans to Maldives to build its infrastructure, China has the island state over a barrel. According to former Maldivian President Mohamed Nasheed, 70 percent of Maldives’ foreign debt is owed to China, on which the loan interest alone “is more than 20 percent of Maldives’ budget.”

In Sri Lanka, by backing Colombo in the civil war prosecuted by then-Sri Lankan President Mahinda Rajapaksa, China gained considerable influence over Colombo. Without Chinese backing, Rajapaksa’s government would have had neither the wherewithal nor the will to ignore world opinion in its offensive that decimated the Tamil Tigers, the Tamil rebel army that had been known officially as the Liberation Tigers of Tamil Eelam (LTTE), along with tens of thousands of civilians. Rajapaksa in turn began to align Colombo with Beijing, much to the discomfort of India, which regarded itself as the regional power. The Sri Lanka-Maldives relationship also strengthened under the pro-Beijing Rajapaksa’s rule, during which period the Chinese president visited Colombo and Male.

The new administration in January 2015, backed by New Delhi and Washington with the intent of dislodging Beijing, did not help India to the extent it benefited the United States. This is because, the prime minister in the new “unity” government’ headed by President Maithripala Sirisena is Ranil Wickramasinghe, the leader of the Western-leaning United National Party (UNP). At the same time, the UNP, along with the rest of Sri Lanka’s political establishment, finds New Delhi problematic. Beijing has exploited the Colombo-New Delhi divide and used its predatory pricing methods to compel Sri Lanka to re-embrace China. As a result, today, China has a significant presence in Sri Lanka, an island of considerable strategic significance in the Indian Ocean. This includes the right to operate the Hambantota port through a 99-year lease.

New Delhi has been less than vigilant in permitting Beijing a role in what it has always regarded as its own backyard. Sri Lanka is just 32 kilometers from India’s southern coast and the Maldives 717 kilometer away.

It was New Delhi’s readiness to help Colombo in its war against the Tamil rebels that gave Colombo the diplomatic space to enable Beijing’s involvement in Sri Lanka. New Delhi allowed this to happen because it had underestimated Sri Lanka’s diplomatic skills and was blind to Beijing’s global ambitions. India’s loss of leverage with Colombo following China’s intervention in Sri Lanka’s civil war was noted by the International Crisis Group, which observed,“With the LTTE gone, the Indian government may have lost its best opportunity to influence Sri Lankan policy. That powerful leverage has now been lost.”

Sri Lanka, for its part, practiced adroit but duplicitous diplomacy: It assured India it would approach other arms suppliers only if New Delhi couldn’t provide a particular weapon system it needed. Yet it quietly began buying arms from China and Pakistan without even letting India know. In doing so, Colombo mocked Indian appeals that it rely for its legitimate defense needs on India, the main regional power. It was only by turning to India’s adversaries for weapons, training and other aid that Colombo pulled off a startling military triumph.

In the wake of Colombo’s victory over the Tamil rebels , China observer Wen Liao noted perceptively in an article aptly titled “China Crosses the Rubicon” that for two decades China was guided by the concept of “peaceful rise,” but that concept in reality ended on Sri Lanka’s beachfront battlefields. In the 1990s, China sought to hide its “peaceful rise” behind a policy of “smile diplomacy” to allay its neighbors’ fears. In pursuit of this trade barriers were lowered, while soft loans and investments were extended to its southern neighbors. Today, China seeks to shape the diplomatic agenda in order to increase its options while constricting those of potential adversaries. Indeed, Beijing’s presence in Maldives is part of this strategy.

New Delhi has only itself to blame for letting Colombo and Male moving away from its sphere of influence.