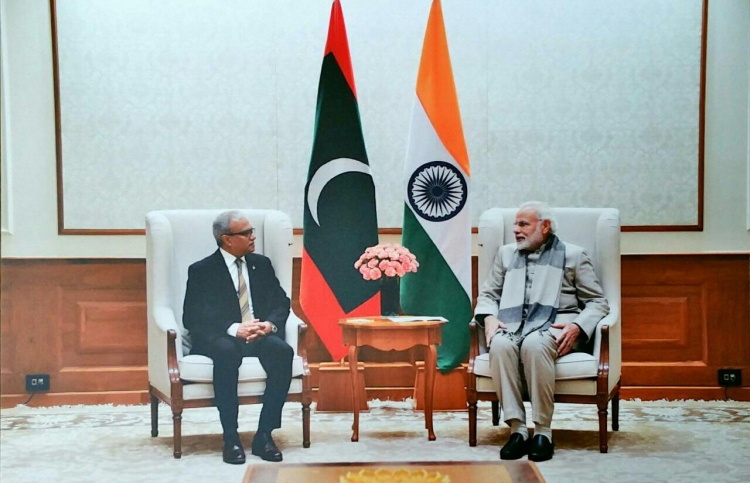 Asim, along with senior officials from the ministry, is visiting India as the special envoy of President Abdulla Yameen. This visit comes amidst rumours circulating about tensions between both countries.

Modi said that India-Maldives had always remained as friends and that India aims to increase its aid in the future. Asim discussed President Yameen’s “India first” policy to maintain the diplomatic relationship. He also thanked India for its continued support and help in developing the Maldives.

During this meeting, the Maldivian foreign minister extended a second invitation to Modi, on behalf of Yameen, to visit the Maldives. Modi accepted this invitation, saying that he will visit “at a convenient time”. He thanked the Maldivian government for the invitation.

The Maldives is the only neighbouring country that Modi has not visited since he took office in 2014. A visit was planned in 2015, which was later cancelled. The Indian state had claimed that it was due to the political chaos in the Maldives at that time. Though Modi had cancelled his visit, the Maldivian president had paid a courtesy call on him during his visit to India.

In addition to meeting Modi, Asim had also met with India’s Minister of External Affairs Sushma Swaraj to discuss the relationship between the countries. The Maldivian government’s “India first” policy and India’s “neighbourhood first” policy were discussed at this meeting.

Talks of a strained relationship between the two nations appear to have begun with the Maldives signing the Free Trade Agreement (FTA) with China, according to Indian media. In addition to this, the suspension of Gaafu Alif Atoll councillors after they met with Indian ambassador Akhilesh Mishra, without prior permission from authorities, was said to have heightened the tensions. The Maldivian defence minister had met with Mishra after this incident.

The government has asserted that the relationship it has with China would not affect ties with India in any way. Officials of both countries have said that the historical friendship between the Maldives and India remains just as strong.