Last Sunday the Human Rights Commission of the Maldives celebrated the “great successes in the areas of protecting, promoting and sustaining human rights” in the country.

The statement, marking Human Rights Day, lamented how “harassment, mockery, defamation and hateful acts have increased and acts that are harmful to a person’s life have also increased.” Such acts were, it said, against the norms of the “historically Islamic tradition of respect practiced in Maldives.”

Their assessment – and their assertion that there needed to be limits to freedom of expression – have alarmed and angered human rights defenders.

“We are all in chains,” says Aishath Rasheed. Her brother, liberal blogger Yameen Rasheed, was brutally murdered in April. His death was followed by threats of more killings. Yameen had been campaigning to find his friend and abducted journalist Ahmed Rilwan, who disappeared more than three years ago. Police have used social media to issue summons for liberal bloggers living abroad for unspecified allegations. Freedom of expression has been curtailed by a defamation law.

“There’s no freedom of assembly, there’s no right to protest, and even if we protest or talk about our concerns, action can be taken against us,” she says. “There’s pressure to be government aligned, so no one can do their jobs,” says Aishath, a civil servant who was fired for taking part in a march marking three years of Rilwan’s abduction.

Her family appealed to the HRCM earlier this year to oversee Yameen’s police case because they feared evidence might be destroyed. There was an initial response, but nothing since. 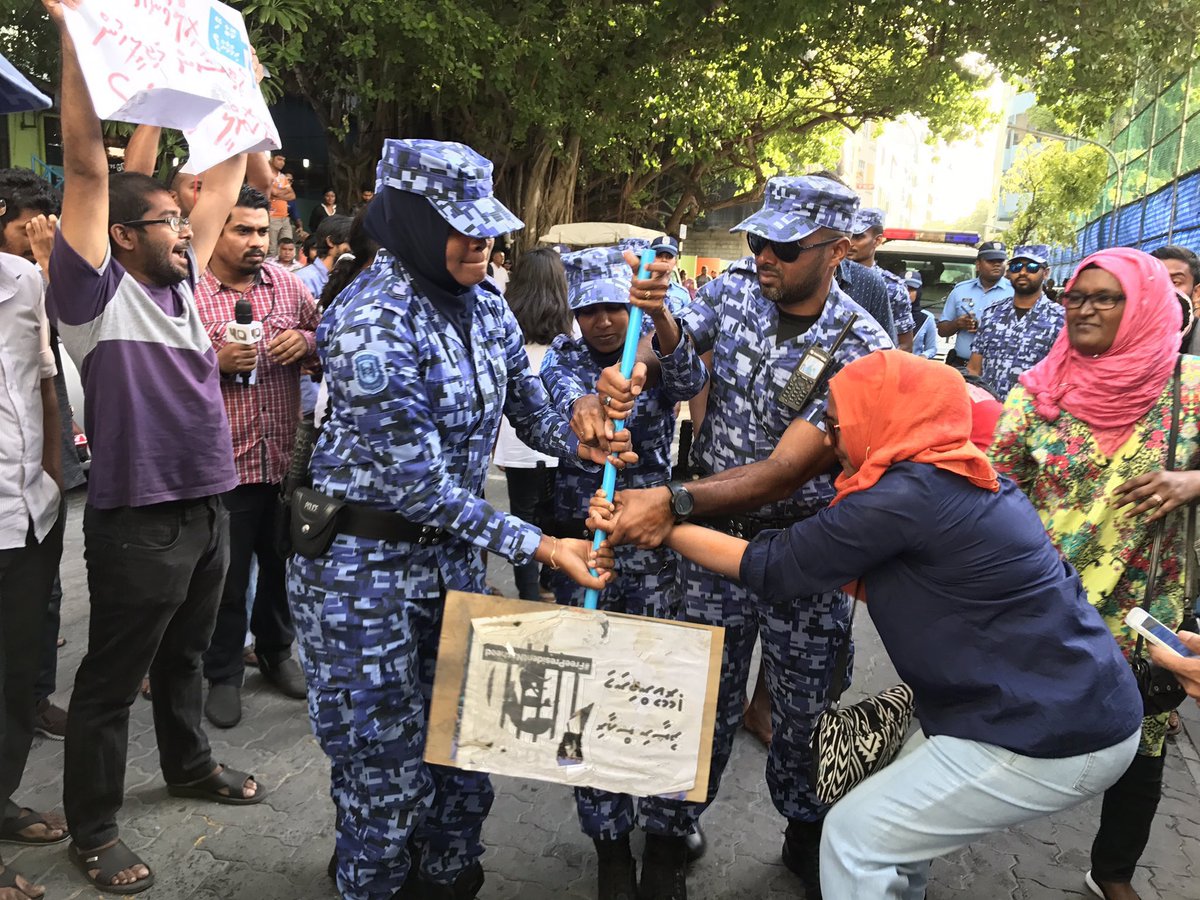 The HRCM cannot carry out its role, says former commission member Ahmed Tholal, leading to gross human rights violations. “We see the government hasn’t paid attention to human rights. They turn a deaf ear to international concerns and disregard treaties it has signed up for.”

The Maldivian government has been preparing for executions since lifting the six-decade moratorium on death penalty in 2014 despite international condemnation.

Tholal, who now works at the anti-graft NGO Transparency Maldives, says constitutional rights are not protected by the government.

“This includes freedom of expression, assembly, economic, social, cultural rights, the right to life, rights of migrant workers who face systemic discrimination – HRCM hasn’t talked about these at all. So I wonder what successes they’re celebrating.”

He believes the human rights situation has been deteriorating since 2013.

A ‘Freedom of Assembly’ bill passed in 2012 outlawed demonstrations outside private residences and government buildings, and set limitations on media not accredited with the state. It defined gatherings as a group with more than one a single person. In 2016 a new bill was passed giving police authority over protests in Malé after a Home Ministry ban.

“In 2017 this became worse – what you say is enough to imprison you, charge you with terrorism, prosecute you, fine you. Political intimidation to political opponents has also increased.

“While we celebrate Human Rights Day, Maldives doesn’t have basic human rights. HRCM doesn’t serve its purpose if it can’t pressure the state. The people need to know the work they’re doing. Even right now, as we watch, the government is taking away our rights.” 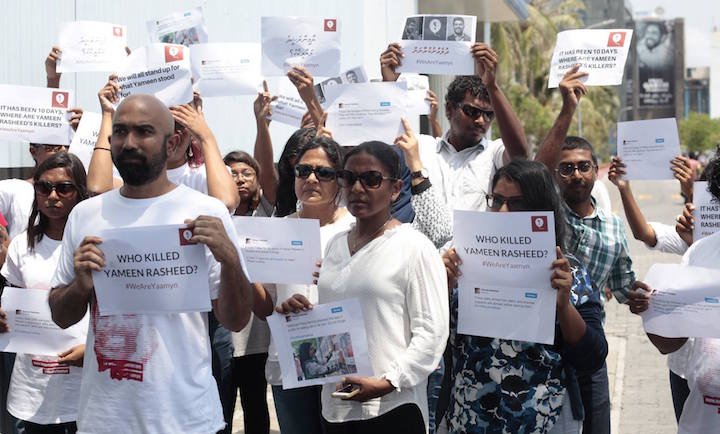 Tholal says the HRCM has undertaken projects that are yet to be completed.

“When I was at HRCM, I used to say the work we do hasn’t been done unless the public is aware of it. For example, in 2012 we worked on a national inquiry regarding educational opportunities for people with disabilities. The report has been completed with statistics and testimonies from parents which they gave with utmost trust, and a lot of funding was spent on it. And yet the report hasn’t been published, and every day it loses its value.”

The presidential elections in 2018 are a source of concern given the human rights situation.

“The pre-election environment we see is not one which has room for a free, fair, and competitive election,” he says. “There’s no institutional integrity. The Elections Commission decided MPs have lost their seats without there being a Supreme Court hearing, yet there’s been no attempt or urgency for a re-election. That’s because, as we saw with local council elections, the elections can be pushed back until the ruling party is ready. And lastly, political intimidation and jailing political opponents is very concerning.”

“The government can argue that freedom of expression or assembly is not a fundamental right,” says Ahmed Naif from the NGO Maldivian Democracy Network, “but no one in their right mind who values democracy would think so.”

The HRCM was unavailable for comment at the time of going to press.

On this World Human Rights Day, it is unforgivable that many of our people are deprived of their basic human rights. No progress can be achieved without every single person in the community enjoying their full human rights.

As we mark another Human Rights Day, @hrcmv is dysfunctional. Eight custodial deaths in the past two years, and countless unsolved murders and gang attacks. Our democracy movement was founded to prevent torture and ill treatment. #HRD2017

Every Maldivian should take pride in the country’s achievements and its long standing commitment to promoting and protecting human rights, both at home and at the international arena, says Foreign Minister @ASIM_MDV in his message on #HumanRightsDay. https://t.co/L0M2ofxj5F

As we mark this year’s #HumanRightDay celebrating the 70th anniversary of the @UN Universal Declaration of #HumanRights , Maldives Government continues to violate our fundamental rights and freedoms! Stop these atrocities immediately!https://t.co/kmdUzLm1ex #Standup4HumanRights pic.twitter.com/CnUXkc4zhq

Thank you Commissioner General, Board members and staff of MIRA for the thoughtful gifts and wishes and in joining us as we celebrated the International Human Rights Day pic.twitter.com/YRlkEBZ5VS

Message on the occasion of the Human Rights Day by the British Ambassador to Maldives His Excellency @JamesDauris #StandForRights #RighttoLife #TMHRC2017 pic.twitter.com/LT47QcGuCT

Members of @hrcmv are responsible for many #HumanRights violations that are happening in #Maldives. They must be held accountable and international support would help. 7 dead inmates, 1 murdered HR activist, more than 1500 political prosecutions. @amnestyusa @hrw @pressfreedom pic.twitter.com/an9qRFe0ff

@yaamyn will remain an inspiration to #humanrights #defenders in #Maldives for generations to come.#NeverForget#HumanRightsDay#StandUp4HumanRights#JusticeForYaamyn#WeAreYaamyn ? pic.twitter.com/OzBqm3U4yb

Challenge 1: Name even one jail established in accordance with the law pic.twitter.com/gCLjox1eBR

Challenge 2: If Dhoonidhoo is a custodial jail, how is it lawful for @Ahmed_Adeeb to be held there? Is he also not entitled to the protection of the law? pic.twitter.com/URRELYShOO

Challenge 3: #StandUp4HumanRights of Col. @nazim7878 who remains languishing in jail despite all the evidence proving his innocence. pic.twitter.com/ziIi11eO60

Challenge 4: Whose human rights are protected when @ShimranAb is jailed for merely speaking at a rally, and the real terrorist, who admitted in court to making bombs to use at that same rally, escapes without charge? pic.twitter.com/0q2WNqLyxd

6: #StandUp4HumanRights of our “disappeared” & all those brutally murdered & deprived of their #RightToLife

On #HumanRightsDay2017 a regime puppet frm an office named “Human Rights Comission of #Maldives (@hrcmv ) popped up on State TV & basically said that Rights can be protected for those who obey. She thought protecting basic rights is a reward for obedience ??‍♂️ pic.twitter.com/g1Q9E4ybNI