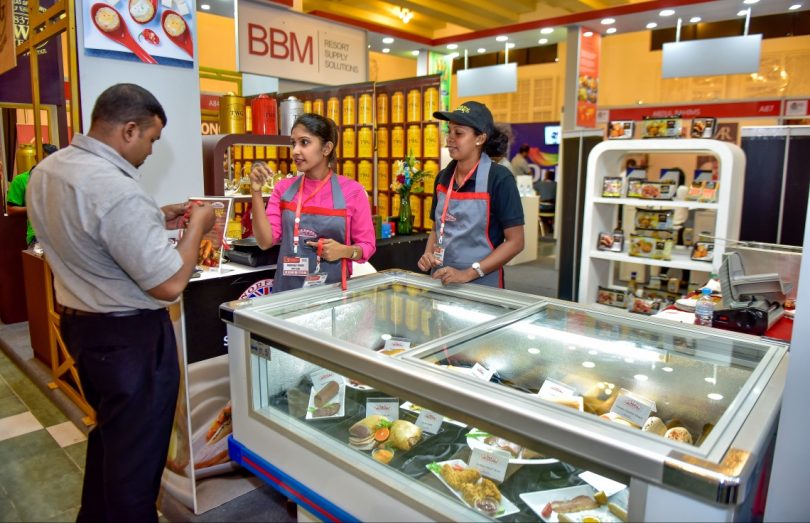 The Hotel Asia Exhibition is like the hospitality industry’s one-stop solution that comes along once a year. The largest trade and hospitality expo in the Maldives, this internationally recognized premier event brings a haul of marketing and networking opportunities, prospects to grow and advance businesses, and newer and more innovative answers to all the problems in the sector, be it for resorts, hotels, guest houses, restaurants or cafes.

This year’s fair kicked off Monday at Dharubaaruge convention centre in capital Male, with the participation of 175 firms, both local and foreign, that represented various sectors of the hospitality industry. The three-day expo, which also featured the renowned and highly anticipated International Culinary Challenge, was declared a raging success by its main sponsor Best Buy Maldives (BBM), one of the leading resort suppliers of the country. 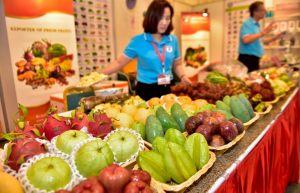 A stall at the Hotel Asia Exhibition 2017. PHOTO: NISHAN ALI/MIHAARU

BBM had also introduced new brands to the Maldivian market during the exhibition, such as Sabatino Truffles, Norfolk Foods’ sausages and meat, and CloverSoft tissues and wipes.

The bustling fair boasted companies and firms that provide services ranging from state-of-the-art software and security, to laundry, waste management, and extermination. From premium chocolate sellers to outdoor furniture and swimming pools, Hotel Asia is a hospitality haven.

Cooking up a storm

Hand-in-hand with Hotel Asia comes the Internationally Culinary Challenge, the biggest competitive cooking event in the South Asian region. Endorsed by the World Association of Chefs Societies (WACS), this year challenge was enthusiastically taken up by over 600 contestants. Among them were chefs from 63 resorts of the Maldives.

The Culinary Challenge is considered one of the most prestigious in the Maldives, as it is internationally recognized and, most importantly, judged by a panel of celebrity chefs from around the world. 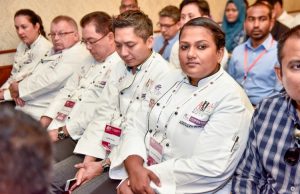 Chef Aminath Shani (R), one of the judges of the International Culinary Challenge at Hotel Asia Exhibition 2017. PHOTO/MIHAARU

This year, 18 globally ranked chefs arrived in the Maldives to judge the challenge. Headed by Alan Palmer, a veteran English chef who is an Honorary Lifetime Member of WACS with over 50 years of experience in the culinary arts, this year’s panel also included three local chefs: Ishaq Solih, Aminath Shani and Abdulla Sobah.

Chef Palmer described the opportunity as an open door for Maldivian chefs to step out into the world and judge international culinary contests. He added that the three chefs who received this honour are also prime for international qualification.

As per the norm, Hotel Asia was open for the public with thousands of visitors streaming in. Perhaps the attraction that drew most of them was the opportunity to taste exotic food on the spot. Stalls often offer tastings of foreign fruits and food products rarely available in the Maldives, and this has always been one of the highlights of Hotel Asia for the casual observer.