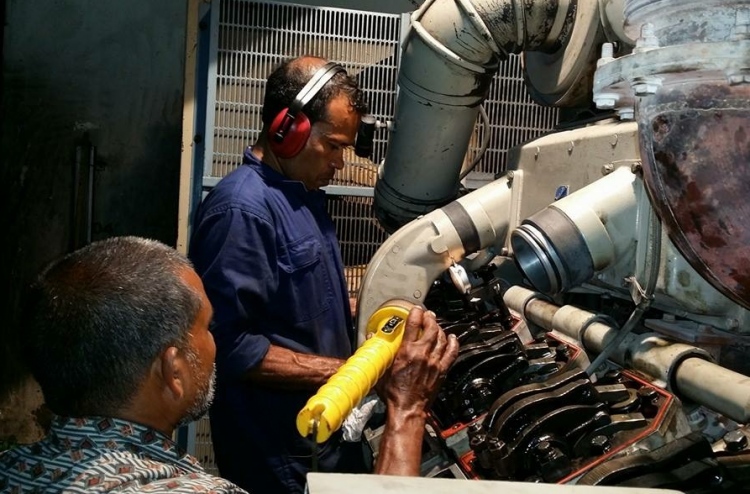 Corruption in Fenaka Corporation’s business transactions, particularly in purchase of US Dollars and fuel, had caused the state losses amounting to millions of Rufiyaa, according to the latest audit report on the state-run utilities company.

The audit report, signed by Auditor General Hassan Ziyath, was released Wednesday and appears to confirm longstanding public speculations of major graft involved in Fenaka’s dealings. Most notably, the report unearthed shocking cases of corruption in Fenaka’s operations between the years 2014 and 2015 to purchase diesel for its powerhouses and dollars to outsource goods and services procurement to foreign firms.

According to the audit report, in 2014 Fenaka purchased 16 million litres of diesel from private suppliers at rates higher than state-run Fuel Supplies Maldives (FSM)’s diesel prices, and 10 million litres in 2015. The total amounts to an additional MVR 21.8 million spent in buying fuel during these years.

While Fenaka claims that it turned to private suppliers because FSM could not deliver fuel in a timely manner to different islands, FSM maintains that it meets deadlines as long as buyers provide sufficient time when placing orders.

The report highlighted that Fenaka had, in 2015, taken quotations to buy diesel from several companies that appear to belong to a single entity. Fenaka had purchased diesel worth MVR 4.3 million from these companies without taking quotations from any other suppliers.

The audit further stated that Fenaka had attempted to cover it up by taking quotations from these companies under different names. The Auditor General declared that these transactions indicate provision of illegitimate gains to a specific entity, and urged the Anti-Corruption Commission (ACC) to probe the issue.

Fenaka had purchased MVR 26.1 million of diesel from a single supplier in the years 2014 – 2015, without taking quotations from any other companies, for its powerhouses in several islands in Thaa atoll.

The audit report noted that, under Fenaka’s regulations on goods and services procurement, the company may take quotation from a single supplier only in cases of emergency or under circumstances that prevent Fenaka from seeking quotations from minimum three suppliers.

The Auditor General further refuted Fenaka’s claims that the company in question was the only supplier for Thaa atoll, pointing out that FSM and other private suppliers had proposed diesel rates to Fenaka for that region. Moreover, Fenaka’s chosen company offered diesel rates that were, on average, MVR 1.29 higher than FSM’s offered rates, resulting in MVR 5.4 million wasted by Fenaka in purchasing fuel for the atoll.

Thus, the AG stressed that this issue must also be investigated by the ACC.

Millions of US Dollars from illegal sellers

However, the audit report declared that all the companies that had sold dollars to Fenaka in 2014 and 2015 were not authorized money exchangers or sellers, and thus the transactions were illegal. The report also highlighted that while Fenaka had purchased dollars at the standard rate of MVR 15.42, it had made additional payments of up to MVR 5 million as commission to the sellers.

Hence, the Auditor General urged Fenaka Corporation to adhere to legal procedures by buying fuel from the best proposals and adopting an honest policy in purchasing foreign currency.