The original Dhivehi article was published on Avas.mv website on 11th October 2017.

In contrast to neighbouring countries, Maldives economy is small. The income generating resources are also less. The entire economy is dependent on tourism. Therefore, in order to broaden the economy, the government started several initiatives. Likewise, loans were taken from several different foreign financial institutions. So the question is – does the Maldives have the capacity to repay all these debts?

‘The current investment in the Maldives are areas that will contribute to the growth of Maldives GDP, which is acknowledged by the World Bank and IMF,’ said Fisheries Minister Dr Mohamed Shainee.

‘The current investment in the Maldives are areas that will contribute to the growth of Maldives GDP, which is acknowledged by the World Bank and IMF,’ – Fisheries Minister Dr Mohamed Shainee.

This project is undertaken by massive loans. Foreign Financial Institutions like Saudi Fund for Development, Abu Dhabi Fund, Opec Fund for International Development (OFID) are amongst them. 39% of the loans are spent on these projects. As per the estimated budget for this year, the majority of the foreign debt will be sourced from foreign financial institutions.

The government said after the development of VIA, the economy will enjoy a considerable change. The government believes that when VIA is extended to increase its capacity to 7 million international passengers, it will result in huge economic growth. 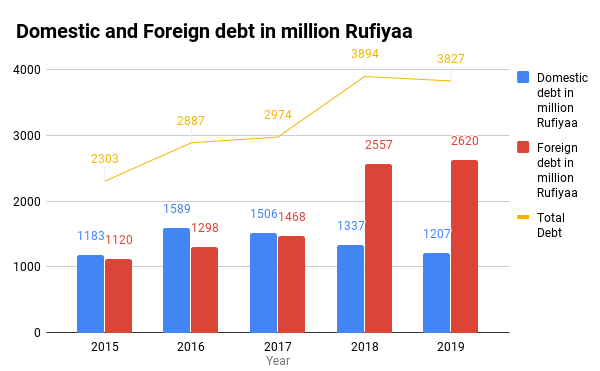 The other question is – how do we come up with the money to pay back the loans for these projects? And as government previously said, what results has been achieved among the plans to increase the public income?

Regardless, the year is almost over. The question is, whether all these loans taken for projects can be repaid? We will definitely know the answer to this when the projects are completed.