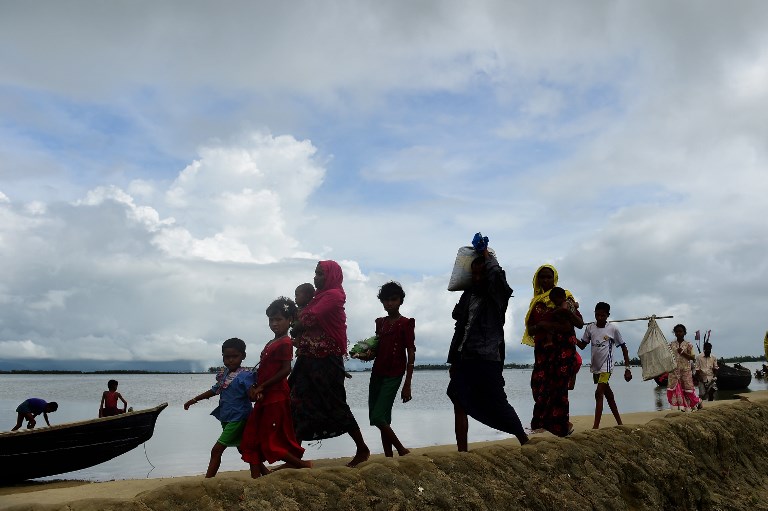 Rohingya Muslim refugees arrive from Myanmar after crossing the Naf river in the Bangladeshi town of Teknaf on September 12, 2017.
Some 370,000 Rohingya have fled Myanmar and entered Bangladesh since an upsurge in violence late last month, the United Nations said September 12. “An estimated 370,000 Rohingya have entered Bangladesh after fleeing violence in Myanmar’s Rakhine state since August 25,” Joseph Tripura, a spokesman for the UN refugee agency, told AFP. / AFP PHOTO / MUNIR UZ ZAMAN

Under the government spearheaded nationwide movement to relieve the plight of Rohingya refugees fleeing Myanmar, the state has opened accounts in two banks to raise funds for the persecuted Muslim minority.

According to a member of the special committee assembled by the government to oversee the fund-raising movement, people can donate money in both Maldivian Rufiyaa and US Dollars to the accounts in either Bank of Maldives Ltd (BML) or Maldives Islamic Bank (MIB).

Members of the state committee, assembled to coordinate a nationwide movement to relieve the plight of the persecuted Rohingya Muslims in Myanmar, speak at press conference. PHOTO/ISLAMIC MINISTRY

The committee has not revealed the amount of funds raised so far.

The committee member also stated that they plan to establish a system allowing people to donate via mobile money transfer.

The Maldives will launch a special telethon in conjunction with the media from September 21-23 during this movement. The government has already introduced a special hotline, 1440, which was activated on Sunday for the cause.

Minister of Defence and National Security Adam Shareef had previously assured that the telethon will be conducted with full transparency, and that the government will ensure that all the aid and funds raised in the movement are delivered to the Rohingya.

The Maldives recently severed all economic ties with Myanmar earlier this month to condemn and protest the ongoing genocide of the Rohingya in the state of Rakhine. The island nation also has called on international human rights bodies to take imperative action against the persecution.

Local television channel Raajje TV is held a telethon earlier this week to raise funds to aid the Rohingya. The company succeeded in raising over MVR 4 million across the archipelago, to be delivered to the Rohingya via the Red Crescent active at the Myanmar-Bangladesh border.

Hundreds of Rohingya have been killed in military crackdowns in the state of Rakhine in Myanmar, with buildings in Rohingya villages razed and set ablaze while villagers have been raped, tortured and murdered. Several thousands have fled to Bangladesh to escape the bloody persecution while the United Nations have accused the government of Myanmar of committing “crimes against humanity” and carrying out “ethnic cleansing” of Rohingya Muslims.

Myanmar’s State Chancellor Aung San Suu Kyi refuses to discuss the quandary of the Rohingya. The Nobel Peace Prize laureate’s government refuses to recognise the Rohingya as an ethnic group in Myanmar, and has blamed the violence in Rakhine State on the “terrorists” in the region.