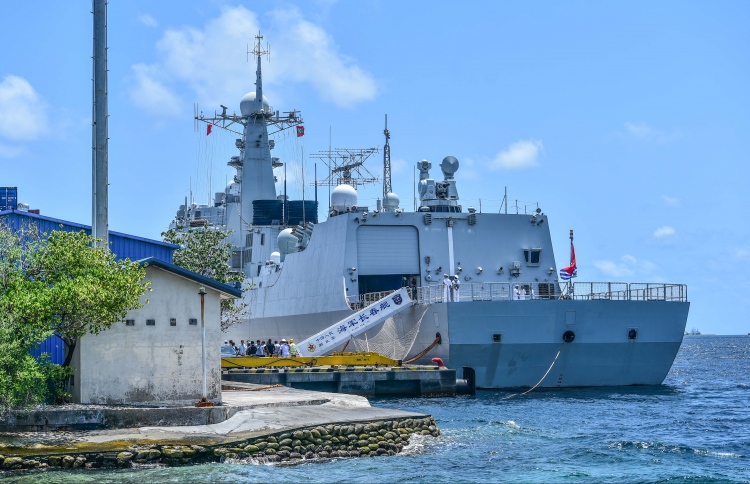 The presence of three Chinese Naval warships in the Maldives is unprecedented and could indicate Beijing’s larger military presence in the Indian Ocean island nation in the future, says former Maldivian president Mohamed Nasheed.

Speaking to The Hindu during a visit to India, his first in some years, Mr. Nasheed, who now lives in exile, said the warships presently docked in Male harbour on a five-day “goodwill visit” should be a cause for concern for India as well.

“Right now, three Chinese warships are in Male; we’ve never seen this before. We have never seen warships coming into the Maldives like this, for a goodwill visit or otherwise,” Mr. Nasheed said. The three ships, the Chang Chun, Jing Zhou and Chao Hu docked into Male harbour on Sunday as part of a 23-nation tour flagged off in April this year.

Significantly, India has made no statement on the development, in contrast to the critical comments made when Chinese submarines docked in Colombo harbour in 2014. The Ministry of External Affairs did not respond to queries from The Hindu about the presence of the frigates either

According to a statement from the Maldives National Defence Force (MNDF), the warships would be in the Maldives till Thursday, and PLA-N officers will hold “special training sessions” with MNDF soldiers during the five day visit.

Maldives High Commissioner to India Ahmed Mohamed denied the Chinese warships represented a significant shift in Maldivian policy, citing a previous occasion in 2014, when the PLA’s naval supply ship Changxingdao rushed to Male with fresh water supplies during a treatment plant collapse. India too had sent in tonnes of water and filtration equipment on two naval warships then.

“India is well aware that there is no military presence of any country in the Maldives, and knows better than anyone who is where in the Indian Ocean,” Dr. Ahmed said when asked if the government had contacted the Maldives on the issue.

Mr. Nasheed said apart from the warships, it was China’s growing influence in constructing major infrastructure projects including the $200 million “China-Maldives friendship bridge” from Male to Hulhule island that should be viewed with some concern. “Strategic infrastructure often does facilitate military use. So it is very possible that President Yameen is offering [China] more than just infrastructure projects,” he said.

According to the former Maldivian president, New Delhi is taking a close view of developments in the island, the current political turmoil against President Yameen in parliament, and also the growing Chinese investments there.

“The fact that I came to India on the invitation of a think tank run by the Ministry of External Affairs is message enough…So I see India is engaged,” Mr. Nasheed said.

However, High Commissioner Mohamed said there were no issues between the Yameen government and the Modi government, and both sides are in regular contact.

“The Maldives doesn’t see any signal [in the invite to Mr. Nasheed]. Maldivians are free to visit India without a visa, and so he is free to visit here,” he added.