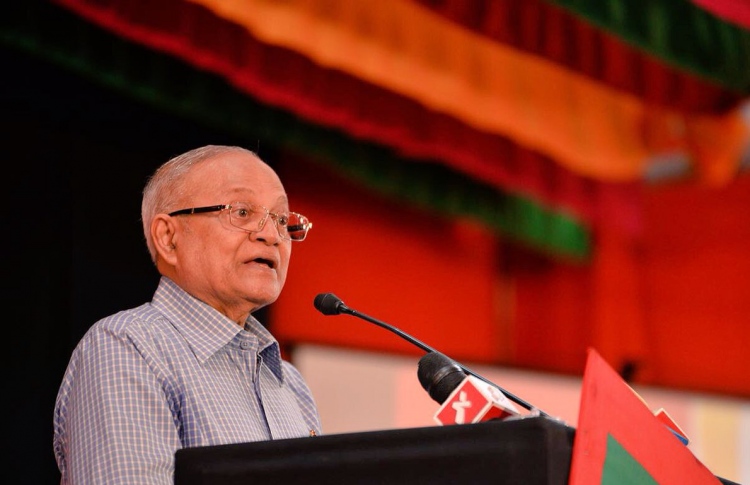 Former President Maumoon Abdul Gayoom has heavily criticised the ruling government, saying that it has been showing clear signs of failure as of lately.

Speaking at an opposition coalition rally held at Jumhoory Party’s main party camp in the capital Male, ‘Kunooz’, on Saturday night, the former president of 30 years accused the government of disregarding the Maldivian Constitution by ignoring its duties to enforce the law.

He said that a clear sign that the government is disintegrating is the state institutions’ failure to take action against the many unconstitutional acts that are currently taking place in the country.

He cited “fear” as the reason for the lack of government initiative, and said that the citizens of a country should not be living in perpetual fear.

“We should only fear God. The only entity we should fear is Allah (swt). I think we should have this reminder framed in all government institutions – the Elections Commission, Human Rights Commission of the Maldives, Anti-Corruption Commission, Maldives Monetary Authority – they all need this reminder,” Maumoon said.

Speaking about his jailed lawmaker son, Dhiggaru MP Faris Maumoon, the former president said that the state institutions have categorically ignored the opposition’s letters regarding his son’s imprisonment. He highlighted how the state is required to answer these letters within three days, but had failed to respond to 45 letters that have been sent to various state institutions regarding MP Faris Maumoon’s situation.

Maumoon, who is the incumbent President Abdulla Yameen’s half brother, described the current Maldivian political-sphere as a “political comedy”. Maumoon took opposition JP leader Qasim Ibrahim being sentenced at a court hearing held past midnight as an example of this “political comedy”, and also mentioned how his son was first accused of accepting bribes but then later accused of bribing lawmakers.

Further, the former president, who had founded the ruling Progressive Party of Maldives (PPM), had warned of his “friends in high places”, saying that the opposition can also garner results by contacting these influential leaders from other countries.

“I have very close friends in other countries. Friends of great stature – friends holding high posts in big international organisations. Thirty years of presidency meant that I had time to build close friendships with these people. And they are all rooting for us. We have an aim that we’re working towards.”

Maumoon revealed that the opposition coalition does receive aid from international communities, but admitted that it will take time to reap results. However, he urged the supporters gathered at ‘Kunooz’ to be patient, and guaranteed results of their current efforts in the near future.