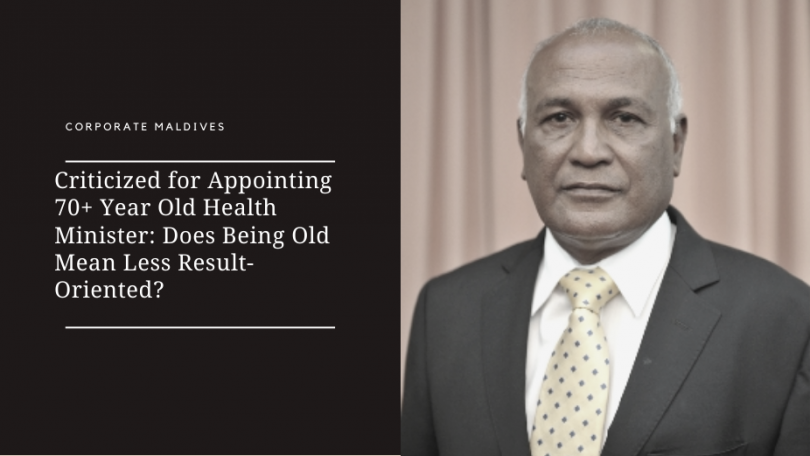 While several people are questioning this decision, especially due to the age of Kerafa Naseem, many high-level politicians have shown support. “I am sure the appointment of Kerafa Naseem will bring in positive changes. During a time the country needed an experienced person in the field for this position, Ibu Solih has made an excellent decision, said Mohamed Nasheed, who is a family member of Kerafa.

However, Dunya Maumoon, former Minister of Foreign Affairs questions: “Is this the right choice for the position? Does this minister carry the right expertise to be appointed in the middle of a global pandemic? Secondly, the consolidation of all ministerial positions leaves the public wondering about their role in decision and policymaking. Thirdly what will happen to the coalition agreements?”

What do researchers and experts say on appointing politicians that are of old age? Robert Preuhs, a professor of political science at the Metropolitan State University of Denver says that younger people in politic brings in new perspectives. “You get new ideas, you get a stronger voice and you kind of mix the pot a little bit to try to bring new policies up to the top of the agenda and really push those policies.” However, he says that when younger, less experienced members come in and can’t get the results they want quickly.

“There are concerns about the age of presidential candidates, certainly you want to elect someone to participate who will hold that office at least for the next four years, and so health becomes an issue,” Preuhs said.

Naseem has been a long time server of various administrations of the Maldivian government, beginning from the time of Ibrahim Nasir. He served as the Foreign Minister of Maldives during the presidency of Mohamed Nasheed. He is one of the biggest figures of Maldives tourism as he was behind the opening of the first resort in the country.

Hence, without a doubt, Kerafa has several experiences that could make him an ideal appointment. Does his age matter as long as he delivers a good performance?