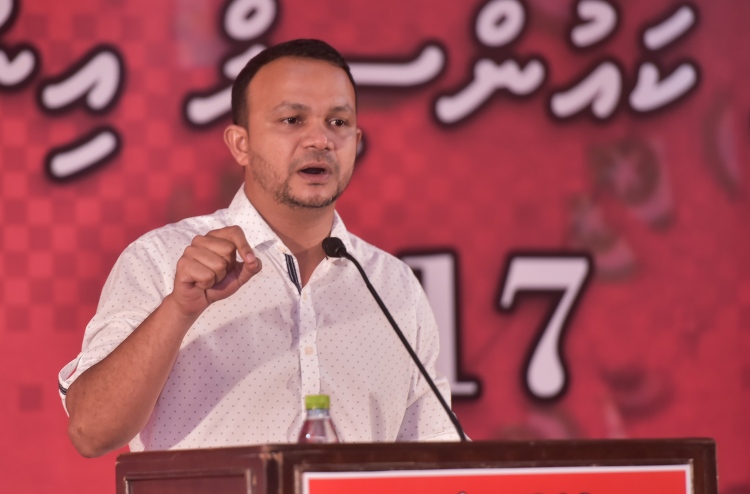 Kendhoo MP Ali Hussain on Tuesday night claimed that only Chief Justice Abdullah Saeed has the power to end the military “hijacking” of the parliament and resolve the political crisis in the country right now.

Speaking at an opposition press conference, the Kendhoo MP said the Separation of Powers is lost in the country at the moment, and that the state has taken over the legislative branch of governance.

“We’re not trying to impose on the work that judges do – but [the Supreme Court judges] have a job that they need to get done immediately. The nation is at a vegetative state. The government has hijacked the parliament and the judiciary. But the parliamentary gridlock can end when the apex court issues its verdict,”

Six lawmakers were disqualified from the parliament following the Supreme Court’s anti-defection ruling. Soon after the ruling, the Elections Commission (EC) had announced that they had been unseated, which resulted in heavy protests outside the parliament house. Since then, four of the six have filed cases at the apex court to reverse the ruling – and the MPs are now awaiting the final ruling.

MP Hussain claimed that the country can move forward only after the apex court issues its ruling on the unseated MPs’ appeal.

“Delayed justice is an injustice,” the MP said, stressing that judges are not allowed to influence each other. He said that judges cannot force or coerce each other to sway rulings in their favour and that it would be an unconstitutional act.

While the ousted parliamentarians’ verdict hearing is still pending, there have been recent reports that the Chief Justice is leaving the country on holiday.