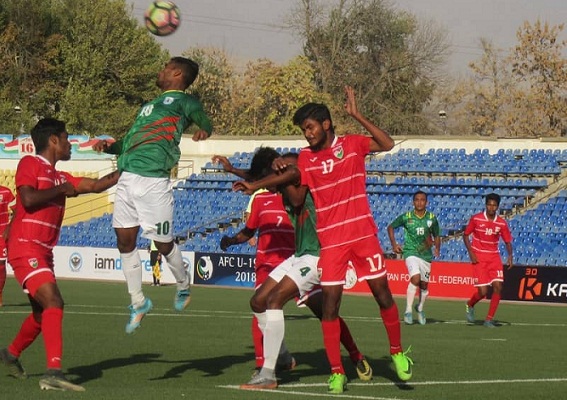 A last minute goal by Mahbubur Rahman enabled Bangladesh Under-19 Football team to take the solo lead in the five-team Group B of the AFC Under-19 Championship Qualifiers beating the Maldives Undere-19 side by 1-0 goal in their 2nd match at the Republican Central Stadium in Dushanbe, Tajikistan on Thursday.

When the match was almost heading for a draw, Mahbubur salvaged the Bangladesh pride scoring the match winner in the 90th minute of the match to huge jubilation of the Bangladesh tent who played an attacking game for most of the time, said sources at Bangladesh Football Federation.

With the result, Bangladesh Youth team topped the list with unbeaten record securing four points from two matches and comfortably stayed in the title race of the Group B after making goalless draw with upper ranked hosts Tajikistan in the opening match on Tuesday.

Bangladesh Youth team, which finished runners-up in the five-team SAFF U-18 Championship in the Bhutanese capital Thimphu last September, also beat the Maldives Under-18 side by 2-0 goals in league match after beating giant India by 4-3 goals with a brilliant came back from 0-3 deficit.

In the remaining Group B matches, Bangladesh will play Uzbekistan on November 6 and Sri Lanka on November 8, both at 3pm Bangladesh time at the Hisor Central Stadium in Tajikistan.

Earlier in the day’s first match, Uzbekistan made a flying start crushing Sri Lanka by 10-0 goals at the same venue at noon.

Abdusalomo made a hat-trick scoring four goals in the 3rd, 21st, 78th and 89th minutes,

Kenjabaev struck two in the 18th and 25th minutes, Zokirov also netted twice in the 63rd and 67th minutes while Izzatov and Mozgovov scored the remaining goals in the 11th and 83rd minutes respectively.