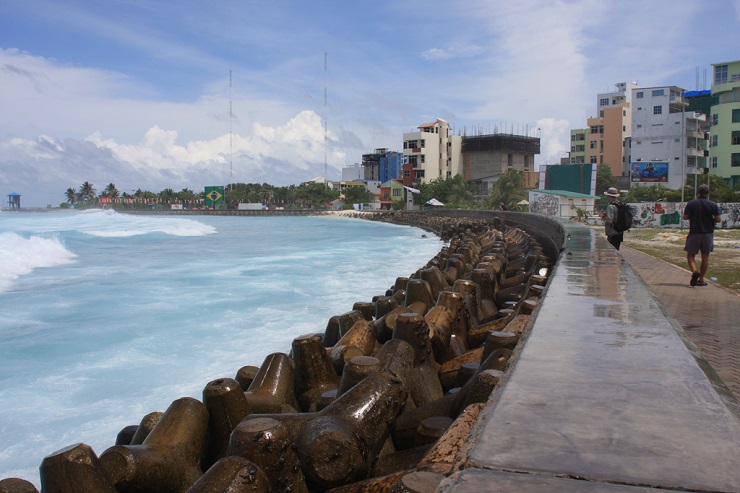 As part of its defences, the Maldives has been erecting a wall around the capital of Malé to thwart a rising sea and a future tsunami.

The 44-member Alliance of Small Island States (AOSIS) represents some of the world’s most vulnerable island nations fighting a virtually losing battle against rising sea levels triggered by global warming and climate change.

A negotiating voice of Small Island Developing States (SIDS), AOSIS has membership drawn from all oceans and regions of the world, including Africa, Caribbean, Indian Ocean, Mediterranean, Pacific and South China Sea.

According to the US National Ocean Service (NOS), the two major causes of global sea level rise are thermal expansion caused by warming of the ocean (since water expands as it warms) and increased melting of land-based ice, such as glaciers and ice sheets.

The oceans are absorbing more than 90 percent of the increased atmospheric heat associated with emissions from human activity, says NOS.

Ahmed Sareer, Foreign Secretary of the Maldives and a former AOSIS chair (2015-2017), told IPS that “warming seas have already shifted the fish stocks that we rely on; back-to-back coral bleaching episodes have undermining essential marine habitats as well as critical ecotourism industries.”

Rising seas, worsening coastal erosion, and increasingly powerful storms have forced SIDS to climate-proof their infrastructure projects both in the Caribbean and the Pacific and even threaten the territorial integrity of low-lying SIDS, he said.

“The devastation caused by the recent storms in the Caribbean are a reminder of how vulnerable small island states are, and how years of development and economic gains can be wiped out overnight, leaving these countries to start from scratch,” said Sareer, whose island nation has been threatened by sea level rise triggered by climate change.

Described as “one of the world’s most geographically dispersed countries” and comprising more than a thousand coral islands scattered across the Indian Ocean, the Maldives has a population of nearly 440,000 people compared to India, one of its neighbours, with a hefty population of over 1.2 billion.

The Maldives was devastated by the December 2004 tsunami, and according to one report, 57 islands faced serious damage to critical infrastructure, 14 had to be totally evacuated, and six islands were destroyed. A further twenty-one resort islands were forced to close because of tsunami damage estimated at over $400 million.

As part of its defences, the Maldives has been erecting a wall around the capital of Malé to thwart a rising sea and a future tsunami.

Addressing the UN General Assembly on December 5, Ambassador Robert Sisilo of Solomon Islands, told delegates his country sat on the largest aquatic continent in the world, and had a huge maritime exclusive economic zone (EEZ) that was much larger than its land territory.

“The ocean had always been the Solomon Islands’ source of livelihood, but it was also its culture, gastronomy and leisure”.

The (June 2017) Ocean Conference had represented a ray of hope, and the international community must accelerate that positive momentum, said Sisilo, calling on the Security Council to address the issue of climate change.

The follow-up and review of the SAMOA pathway is scheduled to happen over the next 2 years. “We need broad and comprehensive engagement from all actors including civil society in the regional and interregional consultations which will be taking place.”

He pointed out that the reduction of harmful emissions, transitioning to renewable sources of energy, and investing in mitigation and adaptation are crucial for achieving the objectives of the Paris Agreement.

“As small island states, we are advocating for the more ambitious 1.5 degree goal, recognising that the impacts of climate change at 2 degrees are significantly worse. Therefore these investments, particularly in the context of transitioning to renewable energy need to be scaled up to a great extent, and also be sustainable and durable,” he declared.

“As SIDS, we also believe that equal focus needs to be placed on adaptation as well as mitigation. We are already experiencing the impacts of climate change on our islands, and the UN Framework Convention on Climate Change (UNFCCC) needs to adequately cater to these needs instead of having a focus on emissions reductions.”

The Maldives, as the Chair of AOSIS, and in collaboration with IRENA, launched the Initiative for Renewable Island Energy (IRIE) in October, which will facilitates support for Small Island States in their transition to renewable energy, and in achieving energy efficiency.

Meeting the financing goal of $100 billion annually by 2020 is essential, and new partnerships with the private sector, non-governmental organizations, and other institutions can help to mobilize the resources, Sareer said.

SIDS say required funding should be predictable, sustainable, adequate and easy to access. In this regard, AOSIS has been advocating for simplified access procedures for the Green Climate Fund (GCF), and also greater transparency on how the funds are allocated and dispersed, with a clear understanding of what constitutes as climate financing.

The Adaption Fund (AF) is important to SIDS because the fund recognizes the particular challenges that many of SIDS face in addressing climate change. In addition, the AF is active in working to ensure its resources are always accessible by SIDS.

In the Fund’s governance, seats on the Adaptation Fund Board (AFB) are reserved for special representatives of SIDS.

So far, 14 countries from SIDS have seen their projects or programmes approved by the AF for a total grant amount of US$96,951,733, including readiness grants. Projects in SIDS account for around 22 percent of the total commitments of the fund.

Even though the total amount approved by the AF is lower than that of the GCF, the AF has approved more projects than the GCF, with less bureaucratic modalities, facilitating direct access through NIEs for small-scale projects adapted to SIDS particular circumstances.

Given the small size of SIDS, Sareer said, projects are more likely to be small-scale projects. It is therefore essential that this characteristic is well understood and taken into account by the different funds under the Convention while reviewing proposals from SIDS.

As AF is tied to the Kyoto Protocol (KP), it may need to undergo changes in its legal status and basic governance structure in order to serve the Paris Agreement

On oceans, Sareer said marine debris, plastics and micro-plastics, are a global problem, as are the more permanent impacts of deoxygenation and ocean acidification resulting from climate change.

“This presents an existential threat to SIDS, since it has a direct bearing on our economies, marine biodiversity, food security and human health.”

Meanwhile, tourism and fisheries, in island states, constitutes a huge portion of government revenue and the health of the oceans is directly linked to these industries.

“Therefore AOSIS wishes to ensure that that these issues are comprehensively addressed, not only in the UNFCCC from the climate change perspective, by also in the context of the implementation of SDG 14 of the 2030 Agenda.”