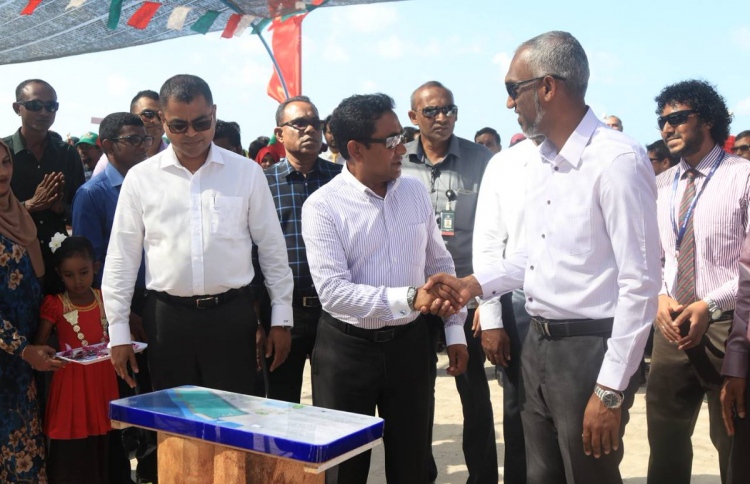 President Abdulla Yameen on Monday declared that he would extend invitations to former presidents to attend the official unveiling of the landmark bridge, being developed between capital Male and airport island Hulhule, next year to bear witness to progress.

Speaking after inaugurating the harbour of Baa atoll Kendhoo island during his current trip to three northern atolls, Yameen stated that while the joint opposition kept up its criticism of his government, they remained selectively blind to the development brought about by his administration. Taking Kendhoo’s harbour as an example of the progress desired by the people, Yameen declared that political leaders would see the ongoing development across the Maldives should they take the trouble to visit the islands.

“In order to open the eyes of all these political leaders, I shall invite them, all the leaders and all the former presidents, to open the bridge with me in the middle of the coming year, God willing,” he said.

“That day, I would like to ask if they could see that bridge.”

Yameen went on to say that the people ought to provide details of finished development projects in their islands to political leaders. He questioned why the opposition members of parliament, who represent the people, refused to give their votes for the new state budget, which was recently passed only with the votes of pro-government lawmakers.

The president accused that opposition parliamentarians refused to vote in order to hinder development and progress for the people, and not because they disagreed with the budget itself. Otherwise, they would have at least amended the budget and voted for it, said Yameen.