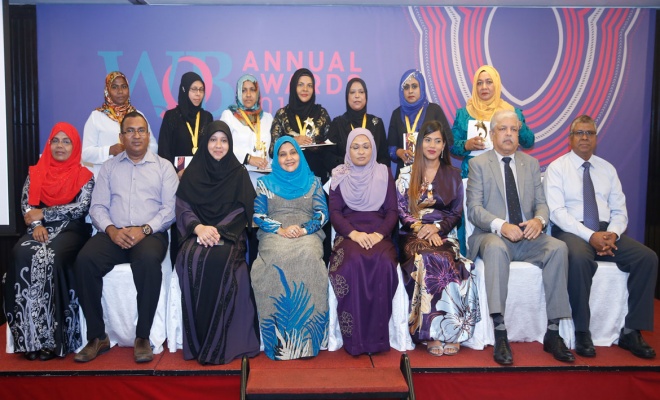 The original Dhivehi article was published on vaguthu.mv website on 3rd April 2017 by Adam Navaz.

In recognition of her services, Women on Board has awarded the First lady Fathimath Ibrahim, ‘Women’s Leadership’ award.

The NGO Women on Board (WOB) working to improve and empower women in the Maldives held its annual award ceremony at Hotel Jen. WOB’s President Fathimath Shafeeqa presented the award to the First Lady Fathimath Ibrahim.

The award was given in honour of her invaluable and tireless services to the community.

President’s wife Fathimath Ibrahim was also the chief guest of the annual awards ceremony of the women’s rights advocacy NGO.

16 women were awarded at last night’s ceremony, including a foreigner.

This is the third anniversary of WOB and they have held annual awards for the last two years as well.