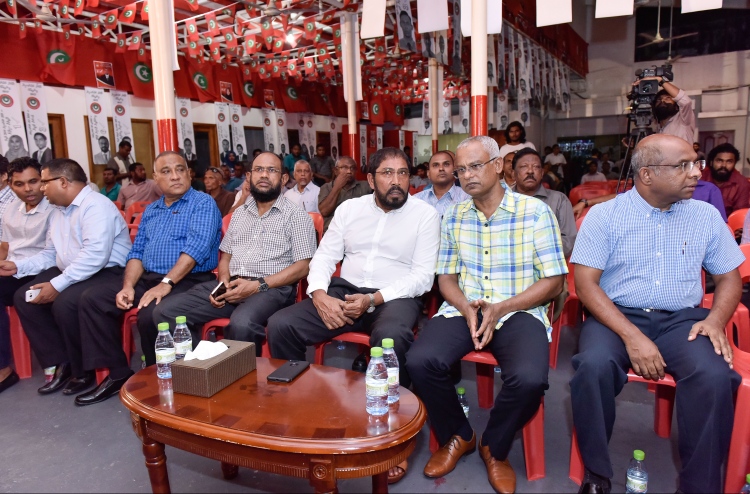 The original Dhivehi article was published on Mihaaru.com website on 6th April 2017 by Ahmed Abdulla Saeed.

Looking at the prevailing political situation in the Maldives and observing what is going on in the parliament, everyone believes that a lot of changes will come to the political map of Maldives in 2018. Among this, it is the presidential election of next year that has grabbed the attention of the majority.

They are targeting in this way as they doubt that a free and fair election can be held while President Yameen continues in office.

“Otherwise an election cannot be held. Isn’t President Yameen a person very scared of elections? With how Maseeh’s censure vote went down that fear he has would have increased now.”

In the opposition’s view, even though PPM leaders continuously talk about next year’s election, the election will not take place. Based on the fact that all who worked with Yameen to elect him are opposing him now and as per calculations done, President Yameen will not be able to garner enough support from the public.

However, the leaders of the ruling PPM dismissed it and says that they don’t hold such thinking.

“I don’t think that sort of talk has taken place in any level amongst us. We are very much preparing ourselves with the confidence that another 5 years are needed to continue with the president’s development (plan). If we are not going to hold elections why are we talking about the ticket for candidacy. That’s the first task.”, parliament’s majority leader Ahmed Nihan said.

“That’s one valid reason we are well prepared for 2018. And the President is also trying to ensure that a perfect inclusive election in the Maldives, where all candidates can contest, in order to go forward”.

Nihan says that the story could be a result of the dissatisfaction the opposition has due to the delay of the decentralisation election (local council elections).

“But there is no truth to that story.”, he said.

With how the decentralisation election is turning out, doubts are raised. But the question is what will happen if they come up with excuses like they had for the local council elections and delay holding the presidential elections within the timeframes stipulated in the constitution?

The government has an excuse, and that is the situation which caused the delay of 2013 presidential elections and the remedy given by the court. From the verdict announced by the Supreme Court on 9 November 2013, it extended ex-President Mohammed Waheed’s term.

That verdict says even though the term of office of the president expires at midnight on November 11, since no one has been elected as president, to hold elections as per the guidelines of the Supreme Court and until the elected person takes the oath of office the existing government will continue and the president will hold office.

Supreme Court came up with this verdict when the first round of voting held on September 7th was deemed void by the Supreme Court, and until the expiry of the term of office on November 11th the presidential election as per the guidelines of Supreme Court was not held and a new president was not elected.

The verdict says that as the Maldives then faced an extraordinary situation and as there were no specific instructions in the constitution to deal with such a situation, out of ‘state of necessity’ and continuity of legal governance, it was taken into consideration.

To arrive at that verdict it was declared that extension of the term due to an extraordinary situation is not a reason for ending the continuity of the existing government.

Thus when it comes to the 2018 presidential election, if a situation arises that holding an election as stipulated in the constitution is not possible, then the government can consider the precedent set by the Supreme court as given above.

If we go back to that verdict, the first thing is if the election is postponed and not held on time as per the constitution, the legality of the president and the government does not change.The second point is even if the term of office of president is stipulated in the constitution if an election gets delayed and the extraordinary situation thus created does not say how long the legality will continue. When the time for the election pass there is no period given in the verdict to hold the next election. It fails even to mention that the election should be held as soon as possible.

Next year’s presidential election or any other election if they decide to drag the evidence that this verdict will be used as an excuse is the verdict from civil court to delay the local council elections which are supposed to be held on January 17.

The civil court gave a verdict to delay the local council election for two months when President Yameen faction of the ruling party PPM filed the case. As the election was delayed due to this verdict what resulted was that new councillors were not elected by the time of the expiry of the term of the present councillors.

The remedy given by the civil court was that even if the term of office of the present councillors expire in February until new councillors are elected they will remain as councillors. And they have considered the Supreme court verdict of 2013 nullifying the first round of voting and the publishing of guidelines by the supreme court on how to hold the election and that the term of the president will be extended.

But the question is whether the extraordinary circumstance of the 2013 presidential election and the excuse to delay the local council election of this year is of the same magnitude.

Another reason the opposition shows that next year’s presidential election will not be held is that the term of office could be extended with an amendment to the constitution. However, it is no longer an opportunity for the government through the parliament as now the government does not control enough votes in the parliament.

Parliament majority leader Ahmed Nihan says extending the presidential term through an amendment to the constitution is not even mentioned.

“That may be just a meaningless joke uttered by some member in certain places of the parliament. I have not heard any of our members talking about extending the presidential term. And that is again something parliament members cannot do, this is something that has to go through the public referendum. These things will not be done like that.”, Nihan said.

Even if the opposition suspects of these, this may not be true too. And those in power denying is also not an indication that they are not having such thoughts.

What is outright clear is that the ruling party has ‘some qualms’ about elections and voting. How they acted on the day of the censure vote of the speaker of the parliament was an evidence to that.

Another living example is dragging the local council election, like the case of the devil’s wedding (from Maldivian folklore, where the date of the devil is always a ‘tomorrow’.