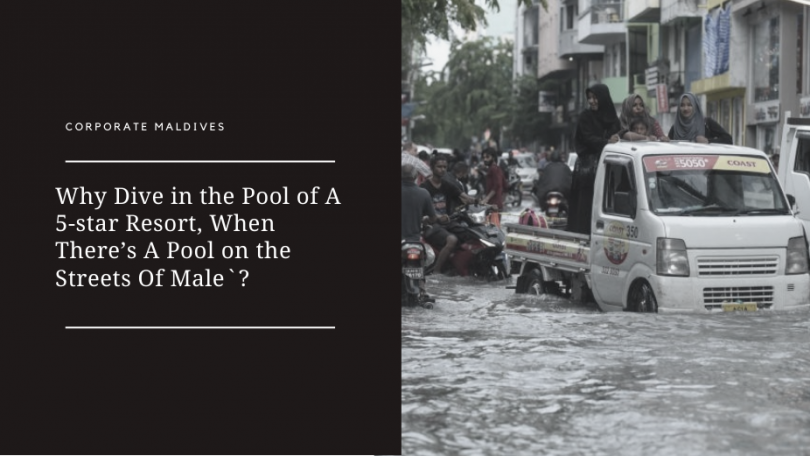 The Maldives- beautiful beaches, stunning reefs and luxury resorts. The destination is undoubtedly amazing. However, what’s even more amazing is that the country can afford to loan out a bridge that costs more than USD 200 million, but it takes ages to improve the drainage system. After heavy rain, the capital city is flooded and it causes significant disruptions.

In 2018, over 100 homes required assistance and families were evacuated as a torrential downpour flooded the streets of the capital. The 223.5 millimetres of rain from 8 am to 8 pm was a record for the capital island, according to the Maldives Meteorological Services.

This is not an uncommon situation in the country. In late 2019, some areas in the City were flooded to ankle height. MNDF was seen on the streets, working to pump the waters that have gathered in different areas of the city. Some of the worst-hit areas included the West Park area and the IGMH area. The flooding also disrupted some government works and even saw some court hearings cancelled.

Male’ City Mayor Shifa Mohamed, in response to the criticism over the flooding amidst heavy rainstorms, stated that former President Abdulla Yameen Abdul Gayoom’s administration concluded with the dissolution of the Maldives Road Development Corporation and that it failed to rectify the issue within Yameen’s term. She said that MVR 79 million was allocated from the 2020 state budget for the development of Male’ city roads and it will be solved this year.

Street floods can be more serious than you think. On the 28th June 2012, 50 mm rain fell on Newcastle upon Tyne (UK) between 3 and 5 pm, a time typically associated with heaving commuting and school collection traffic. Most public transports were cancelled, some roads were completely impassable whilst others experienced very slow running traffic for many hours. The event flooded more than 1200 homes and caused £8m of direct damage to roads and pavements alone. Is this what we’re waiting for?