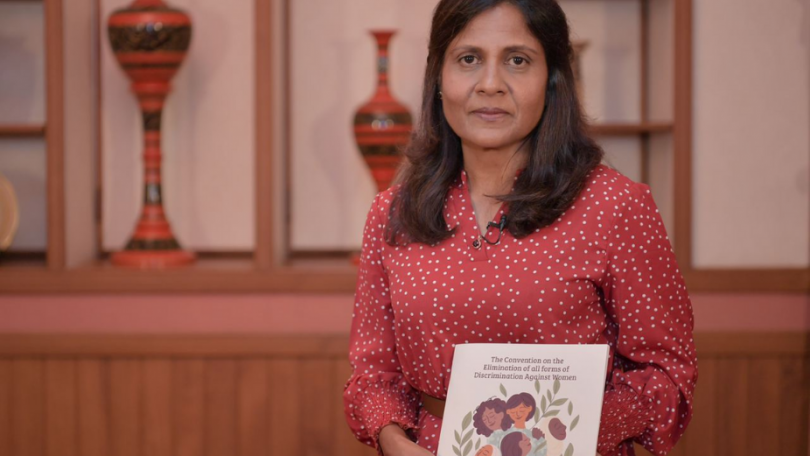 First Lady Fazna Ahmed has stated that when we protect the rights of young girls we are securing them brighter futures as adults and that empowering these young women allows us to safeguard their rights and the rights of their future daughters. She made these remarks during a live video address this evening, launching a child-friendly booklet on the United Nations treaty, Convention on the Elimination of all Forms of Discrimination Against Women (CEDAW), developed by Advocating the Rights of Children (ARC) NGO in partnership with United Nations Children’s Fund (UNICEF) to mark the International Day of the Girl Child 2020.

In her address, publicized through social media channels, she stated that CEDAW is a means of providing protection and equality for women and girls and that the treaty ensures crucial rights for all women and girls. She also noted that raising a generation of educated and empowered young women is pivotal in safeguarding them from the damage caused by discrimination, abuse and social bias. Similarly, she stated that teaching young boys about the rights accorded to women and girls is a cornerstone in eliminating discrimination and bias.

Concluding her message, First Lady Fazna Ahmed stated that one reason why many parents are still reluctant to educate their children regarding their fundamental rights is due to a long-held misconception that empowering children with information on their rights may have a negative effect on them. She also stated that the solution to this is to show children, through words and actions, that rights always come with responsibilities. In this vein, she noted that the booklet named ‘The Convention on the Elimination on All Forms of Discrimination Against Women’ launched today was an important and necessary tool to empower children and families, and extended her gratitude to ARC, UNICEF and everyone who took part in the project.