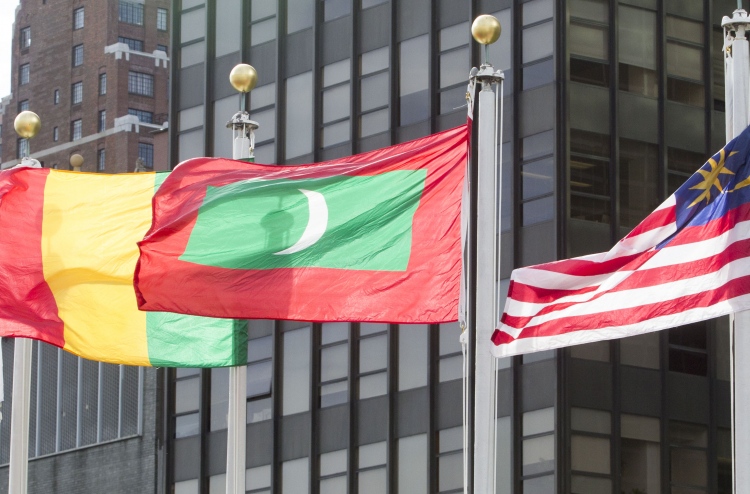 The original Dhivehi article was published on Mihaaru.com website on 17th September 2017.

True, Ministry of Foreign Affairs of the Maldives did not lie. Last Friday, on the 15th September, at the UN vote, there was no mention of Myanmar’s Rohingya Muslims, nor even a relating story to that matter. The vote was taken to decide among the member states, whether to include prevention and stopping of massacres, crimes against humanity happening anywhere in the world, (item 134 of the draft agenda*), in the agenda of the seventy-second regular sessions of the United Nations General Assembly. In the press statement released by the Ministry of Foreign Affairs, it was made clear that it was done intentionally. The government even defended themselves.

Under the motion ‘Responsibility to Protect and the Prevention of Genocide, War Crimes, Ethnic Cleansing, and Crimes Against Humanity’ or R2P, gives way for big, powerful nations to interfere with internal affairs of countries, that is why the government says that they had decided a long time back to abstain from the voting. That was the government’s main defence argument.

Under the R2P, to protect, prevent and condemn crimes against humanity and ethnic cleansing were included. To include the debate on prevention of such crimes, in the agenda, at the seventy-second regular session of the UN General Assembly voting was held, due to its high-priority. This was never done before.

It was successfully placed on the UN agenda for deliberation with 113 member countries casting vote in favour. Amongst them Muslim countries like Saudi Arabia, Indonesia, Turkey and Malaysia, signifying the importance of the vote.

However, for a 100% Muslim nation, the vote didn’t prove to be significant. It is beyond stunning, since Maldives steadfastly seeks a chair at the UN Human Rights Council, but didn’t have the audacity to take a global stand for crimes against humanity and ethnic cleansing. Many have raised questions on whether Maldives is capable to publicly express such notions. In such a crucial vote, when Maldives came in the list along with China, Syria, Zimbabwe and Cuba. Amongst with the nations who said ‘No’, abstained and didn’t attend. This is a list not too fluent in a modern democracy. 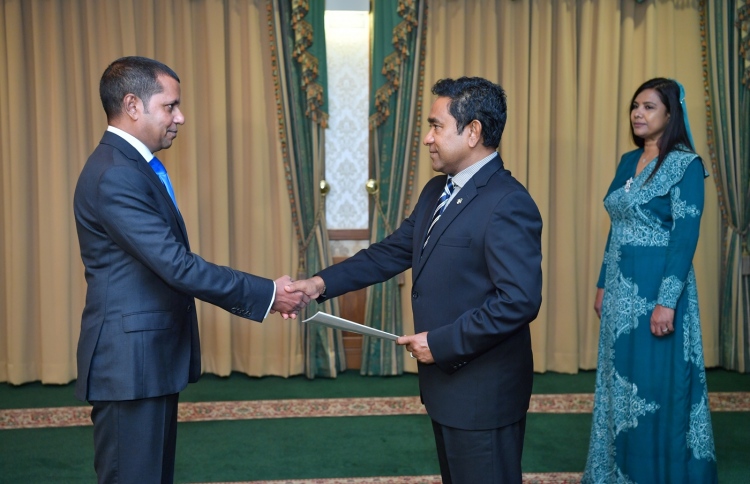 Dr. Ali Naseer Mohamed (Aliny) being appointed as the Maldives’ Permanent Representative to the UN

Not attending to this vote has become a big issue while Maldives has condemned and taken measures against the massacre of the Rohingyas in Myanmar. Maldivians are left immensely livid when the government although took action in its way, but when Muslims nations around the world, the big and the small, cast their vote, Maldives dismissed it.

Despite all this, by taking an irresponsible stand, during a global vote, all those efforts became meaningless. Which leads to the criticisms of the many directed at the government and for having to scramble to find a way to deflect from it, outlines dereliction. 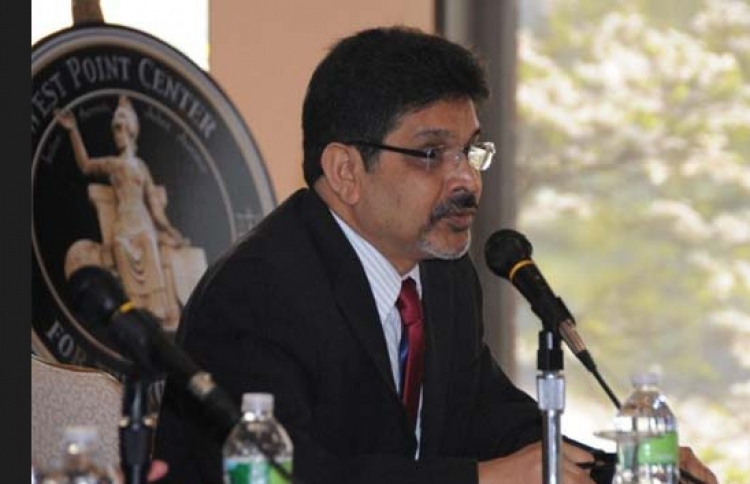 The former Permanent Representative of the Maldives to the United Nations Abdul Ghafoor Mohamed spoke to ‘Mihaaru’ and said, a few years ago the R2P concept was adopted by the UN and discussions were unofficially held. However, it was the first time to vote to include in the agenda at the regular session of the General Assembly.

‘Any person with common sense will know that there will be a reason why R2P is included in the agenda of the regular session of the UN General Assembly. I also believe that some countries see, that R2P is a concept that can be abused. It is believed that with the use of this concept, powerful nations can invade small nations,’ said Ghafoor.

‘However, R2P will be included in the regular session of the UN General Assembly, for a valid reason. The ongoing ethnic cleansing in Myanmar is the primary concern of the whole world at the inauguration of the assembly this year. Therefore, it indicates that by including this item in the agenda in the regular session that the Myanmar crisis is the prominent issue today. By saying that it (inclusion of R2P in the UNGA agenda) has nothing to do with Rohingya situation, is to mislead the public.’

Ghafoor believes that the concept of R2P is similar to the Resolution Maldives proposed to the UN raising concerns on the protection and security of small states after experiencing the terror attack of 3rd November 1988. The motion also states that if the sovereignty of a country is being threatened, other countries must come to protect the nation.

‘Even in R2P, it states that it is imperative that each country protect and safeguard its citizens. In the circumstance where countries are incapable of doing so, other countries must help them. When citizens are faced with unacceptable circumstances, ethnic cleansing, crimes against humanity, international communities must extend protection. R2P essentially says is in whatever circumstance, to achieve human dignity,’ said Ghafoor, who worked in the foreign service for 27 years.

It also raises doubts regarding the autonomy of Maldives’ foreign policy when the country was absent from voting to include in the agenda of the seventy-second regular session of the General Assembly, against the genocide and anti-humanism crimes carried out in countries.

Many believe that in that vote, Maldives has sided with China, which had recently been establishing good relations with the Maldives. It can also be interpreted that despite having cosy relations with Saudi Arabia, this time listened to China’s wishes.

Former Minister of Foreign Affairs Abdulla Shahid said that the government has begun the task of ‘selling Maldives’ foreign policy on a tray’: at a time when Myanmar is committing mass killings to eliminate Muslims, Maldives government portrayed that image in the UN.

‘It can be perceived that this has been done by the government under the instruction by China. And we condemn that,’ said Abdulla Shahid who also held the post of the speaker of Maldives Parliament.

Word was that Maldives cut ties with Iran and Qatar due to Saudi Arabia’s influence. It was severely criticised when Maldives had no inherent animosity against Iran and Qatar, but due to a Saudi-led initiative, severed ties with both countries.

‘That’s why we now know that Maldives foreign policy is not independent. There’s no self-governance. When it came to R2P case also we saw similar actions. For instance, China and Russia decided not to include in the agenda of the regular session. Which can be considered as a measure taken to prevent dialogue on Syrian war and Rohingya Muslims in the General Assembly. Syrian civil war issues cannot be discussed because Russia vetoes it every time. The biggest ally of North Korea is China. They wouldn’t want to talk about Muslims. Now that leaves room to believe that Maldives also belongs with them, by not being present to vote,’ said Ghafoor. 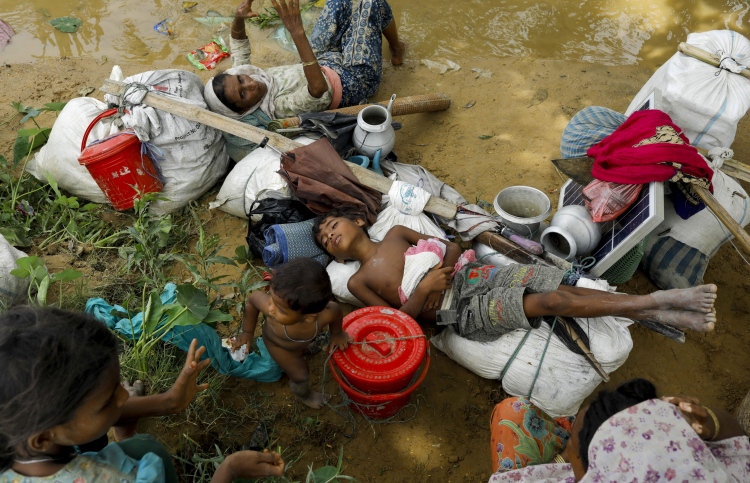 He said up until today, Maldives maintained a foreign policy to be proud of. When Iran and Iraq fought, Maldives had an equally good alliance with them. Even when India and Pakistan got into a bitter rift and situation tensed, Maldives applied the same foreign policy.

‘When Iraq invaded Kuwait, Maldives was among the first countries to condemn it. Maldives had risen up to the occasion and talked courageously. Maldives’ foreign policy has been praised. In the last few years of President Maumoon’s term and especially in President Nasheed’s term, as a small state, Maldives took a big stand, that of a big nation. Among the small nations, Maldives was an influential country. When we talked people listened. Apart from being influential, other countries had more reliance on us,’ said Ghafoor.

However, recently, after quitting Commonwealth, cutting relations with Iran and Qatar and being absent in this vote held in the UN, that nice image has been altered.

In 2005 R2P was unanimously adopted by the UN. Maldives was also in it.

It is an issue when the UN asked for a vote to include it for the first time in the agenda of the regular session of the UN General Assembly, but Maldives avoided and didn’t even want to hold a dialogue on it, in an official capacity. When it is mostly Muslims who tends to fall victim to crimes against humanity and other mass atrocities, as a Muslim nation, it is important for Maldives to take initiative in the official R2P discussions. If there exists a discussion on prevention of such crimes, Maldives’ name should be on the frontlines of the discussion.

Perversely, Maldives is campaigning for a chair in the United Nations Security Council election, 2020. If that happens, Maldives must bravely speak out. 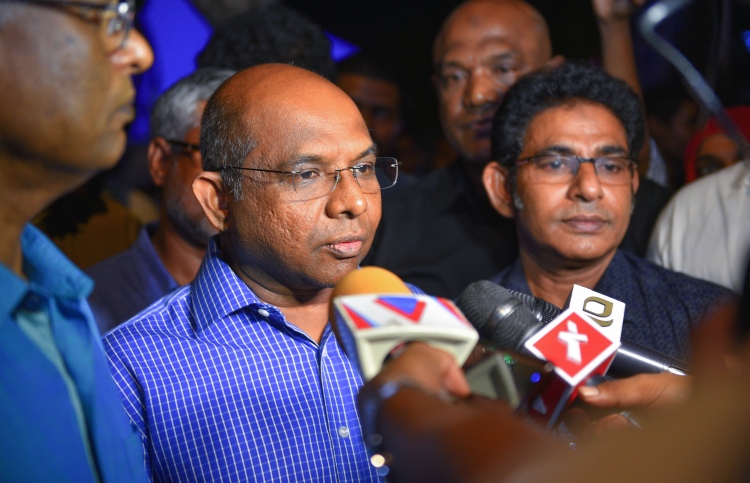 ‘It is illogical to see that when a country cowed down to say ‘Yes’ or ‘No’, while letting other countries convene and play with their foreign policy like a toy, to try to win a seat in the UN Security Council in 2020,’ said Shahid.

‘That is why, day by day the good name, the pride achieved for its foreign policy, Maldives having been adhering to the international communities principles, is becoming hazy and slowly fading away.’

President Maumoon said the vote taken last Friday was a critical vote in Myanmar crisis. However, like he said the problem is that the seniors of the government do not feel the same. That is why it is embarrassing.

*The responsibility to protect and the prevention of genocide, war crimes, ethnic cleansing and crimes against humanity, in the agenda of the seventy-second session.