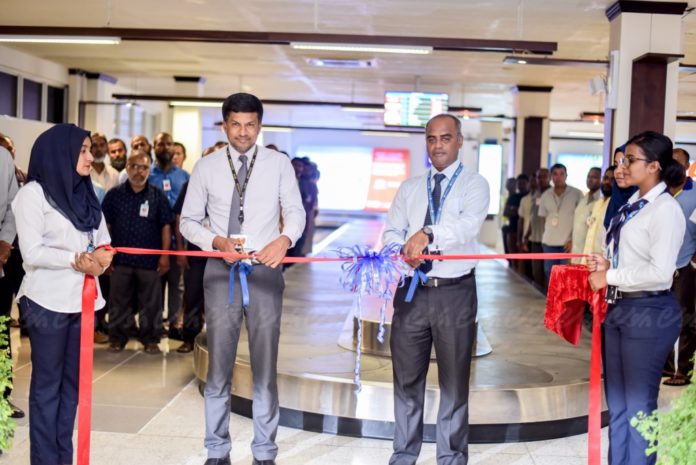 Awaiting the arrival of the peak tourist season of the country, Velana International airport, the main airport of Maldives has unveiled three new departure gates plus expansion to the baggage carousels.

These new facilities were unveiled at a special ceremony held at the airport on Wednesday, 25 October. The newly developed facilities were inaugurated by Managing Director of Maldives Airports Company Limited, Mr Adil Moosa. Addressing the ceremony Mr Adil said that the with the addition of new gates, the total number of gates dedicated for international passengers would be 6 now He further added that previously the airport was able to cater to only 600 passengers at a time, but now 900 passengers can be catered to.

According to Adil, the new gates have been built at a 1000 square meter area and two of the existing baggage carousels have been expanded from 57 feet to 87 feet, increasing the capacity to 300 pieces of luggage at a time.

Adil also mentioned that USD 3 million has been spent on the new gates and baggage carousel expansion.

From November, tourist arrivals will start increasing as the festive season approaches. The peak season will last until April. While the duration is cold winter in a majority of the countries in the northern hemisphere, Maldives will have a dry sunny weather due to its position near the equator and this is favourable among lots of travellers.

This time of the year, resorts in Maldives prepare special programs for the tourists including celebrations for festivities. Some resorts announce their festive programs on media while others publish the program on their website.

Coinciding with the peak season additional flights including some new airlines have been scheduled to operate between Maldives and other destinations worldwide.

The airport is a crucial infrastructure that facilitates the Maldives tourism industry. USD 800 million mega expansion project of the airport is anticipated to boost tourist arrivals to the destination and help reach the target of two million tourists by 2020.