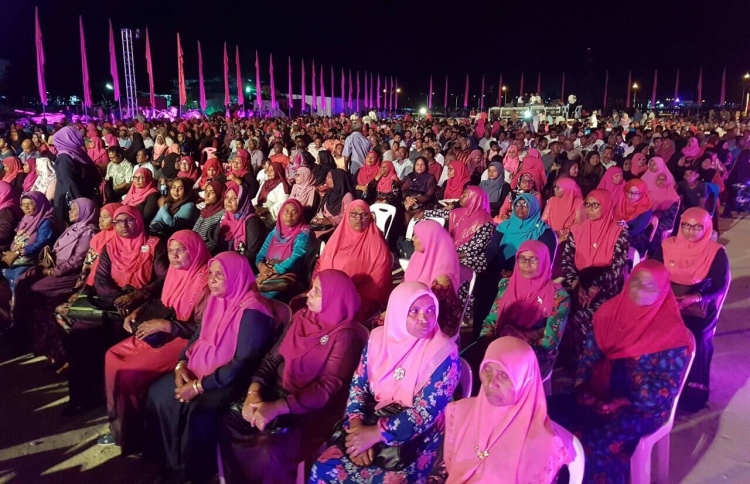 People pictured at a major PPM rally in G.Dh. Thinadhoo.

Speaking at a major PPM rally in the island, the lawmaker of Fonadhoo constituency declared that the residents of Thinadhoo stand with president Abdulla Yameen. He backed his proclamation, pointing out that the additional chairs that were placed for attendees who arrived from nearby islands had not been enough to accomodate everyone at the rally. However, he accused two residents of betraying the nation.

Though MP Abdul Raheem did not name the accused, they are believed to be Saudullah Hilmy and Abdulla Ahmed, two lawmakers of Thinadhoo constituency. They had resigned from PPM earlier and were subsequently disqualified from Parliament by the Elections Commission, based on a prickly apex court ruling on floor-crossing.

Abdul Raheem demanded why the two had left PPM, and by extension Yameen, while the ruling party was “rising high like a firework”.

“Why would they have left, betraying their nation while shouldering selfish motives, if not to abandon the Maldives to foreign hands; to extinguish our Islamic unity, our independence, and our sovereignty?” he said.

He called on the people of Thinadhoo to stand in solidarity with Yameen and “be a role model to other islands” in electing the incumbent president for a second term next year.