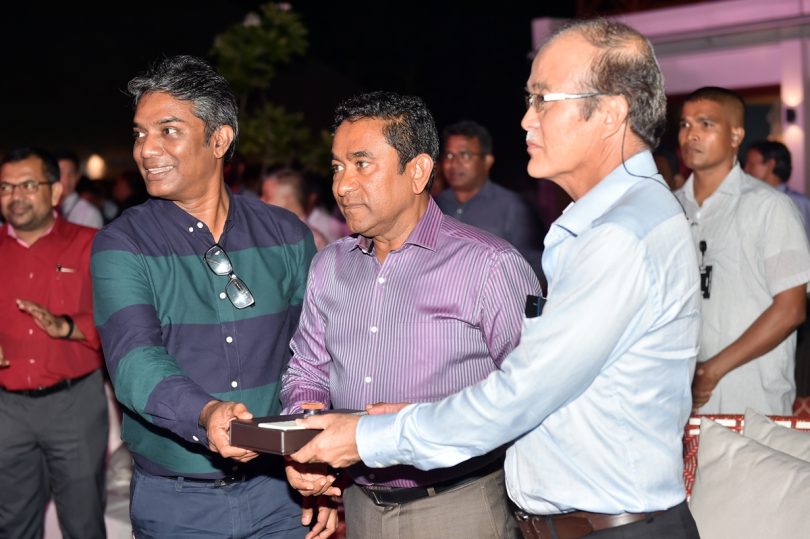 President Abdulla Yameen Abdul Gayoom has said that those who were demeaning the country abroad weren’t hurting the administration, but rather they were causing damage to the Maldivian people. The President made this remark while speaking at the inauguration of the “Mercure Hotels Maldives Kooddoo” this evening, as part of his current visit to North Huvadhoo Atoll.

In his speech, the President reassured that the Maldives was a destination for people from all over the world, regardless of their religion or race. He said that the administration’s desire was for the Maldives to remain a leading host to visitors from all parts of the world.

Highlighting the MoU signed this evening, to provide 1000 training and employment opportunities for the youth particularly from North Huvadhoo Atoll, the President noted that the MoU has guaranteed 1000 young people their jobs, and the necessary training. The MoU was signed between the Ministry of Tourism, Pristine Islands Investment Maldives Pvt. Ltd, and Hotels and Resorts Construction Pvt. Ltd.

Speaking at the function held this evening, President Yameen underscored that as a small island nation, the administration was trying relentlessly to engage the country’s limited resources to the fullest, so that the administration’s pledges were fulfilled, and in turn, the people’s dreams were achieved.

In his speech, the President called on the international community to give the Maldives the space it deserved, and not to falsely brand the country as fanatical. He also appealed to all foreign investors to be developmental partners of the Maldives, rather than criticise everything we do.