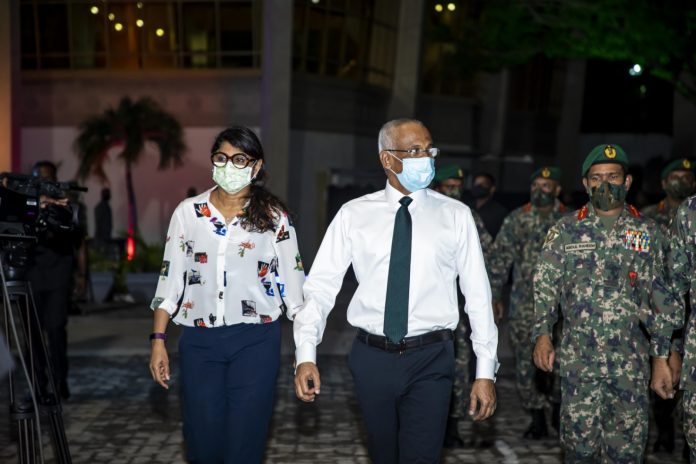 President Ibrahim Mohamed Solih stated that the role of the Maldives National Defense Force (MNDF) and its officers in the national response against COVID-19 has been monumental. The President made these remarks while addressing MNDF officers at a function held at MNDF Kalhuthuhkalaa Koshi this evening.

Speaking about how far the Maldives has come in the response against the COVID-19 pandemic, President Solih remarked that MNDF officers played a pivotal role in every achievement the country has made in responding to the virus. Stressing that the public wholeheartedly acknowledges the service and sacrifice of its officers, the President went on to describe the MNDF as shields protecting people from harm.

Noting MNDF’s role in the National Emergency Operations Centre (NEOC)— which was constituted to manage the Maldives’ COVID-19 response—President Solih said its engagement has been extraordinary, especially in its work to establish the Hulhumalé Medical Facility within a remarkably short time-span. He said that the dedication shown by MNDF officers has been outstanding and is a testament to their commitment to national service.

Though the response against COVID-19 is ongoing, President Solih acknowledged that MNDF officers remain steadfast in their commitment to serving the country and its people. He went on to thank the Minister of Defense, the staff of the Ministry, and officers of every rank within the MNDF, for their discipline, solidarity, resolve, order, courage, camaraderie and love for the nation.

Additionally, stressing that MNDF continues to be a pedestal in the road to national development, President Solih highlighted on the efforts of the Government to further develop the institutional and technical capacity of the country’s armed forces, while ensuring the mental and physical well-being of its officers.