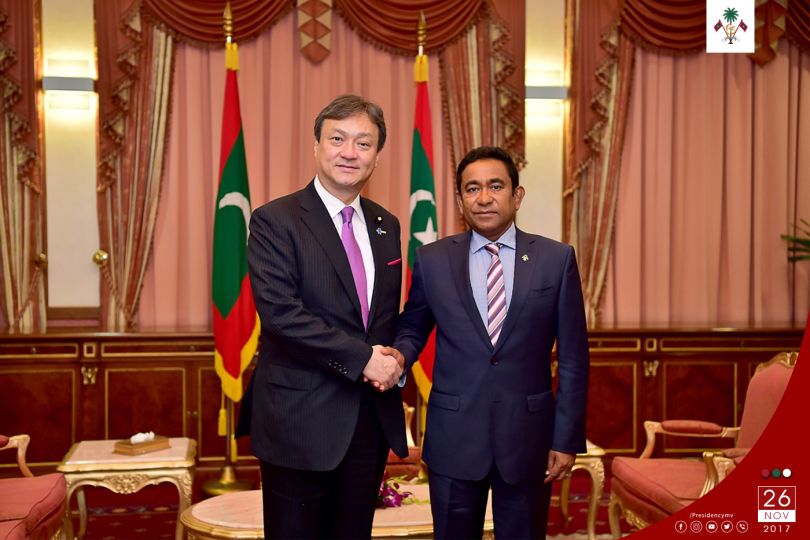 The President opened the talks with high esteem and regards conveyed to the Prime Minister of Japan, H.E. Shinzo Abe. He thanked the Government of Japan for its pivotal role in the progress that the Maldives has attained in achieving its socio-economic development goals and priorities. While noting that the Maldives attaches high importance to its friendly ties with Japan, that has stood the test of time, the President conveyed congratulations to the Government and the people of Japan on the 50th anniversary of the establishment of diplomatic relations between the two countries.

Highlighting on the past and present avenues of development cooperation, the President and the Vice-Minister focused discussions on expanding the tourism market in the Maldives for Japanese tourists, increasing trade and investment from Japan, strengthening counter-terrorism efforts bilaterally and multilaterally, fisheries development, and environmental protection, particularly with respect to climate change mitigation and adaptation efforts. Also discussed were infrastructure development in waste-management, housing, as well as technical expertise from Japan in maritime safety and information technology. The President further expressed hopes to enhance bilateral cooperation on regional and international fronts of mutual concern.

The Vice-Minister conveyed greetings and good wishes of Prime Minister Shinzo Abe and noted that it was an honour to visit the Maldives. He emphasised his parallel views on working closely to bolster existing ties for the common benefit of both countries and their peoples.