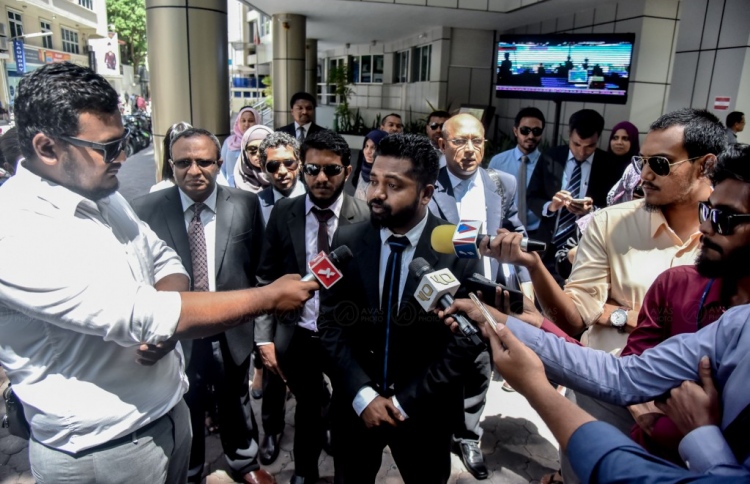 Lawyers speak to press after presenting a “great, big” Constitution to the Attorney General.

Lawyers, who have been suspended over submitting a petition to the Supreme Court, declared Monday that the authorities’ decision to take action against them instead of addressing the issues highlighted in their petition is a great injustice.

A large number of lawyers had signed a petition voicing concerns over the judicial system of the nation, requesting the top court to address and bring solutions to all the obstructions and problems highlighted. While the Supreme Court had thrown out the petition, the Department of Judicial Administration (DJA) on Sunday night suspended 54 lawyers who signed the petition, marking the biggest mass suspension of legal representatives in the Maldives.

DJA declared that the lawyers had gathered unlawfully at the Supreme Court in a manner that obstructs the independence of the justice system and judges. The department further stated that the lawyers were in violation of the Judicature Act, lawyers’ pledge, regulations to prevent contempt of court, and the regulations of the Supreme Court, thus resulting in their indefinite suspension. DJA also deemed the petition as an unlawful document, and signing it as an act that interferes and puts pressure on the justice system while overstepping the procedures and rulings of courts.

Expressing concern over the suspension, the lawyers declared that a mass suspension over a petition that had not even been accepted by the apex court is a senseless act. They also declared that DJA taking action against the lawyers without providing an opportunity for the legal representatives to respond is an infringement of standard procedure.

The former Attorney General and one of the suspended lawyers, Husnu al-Suood, protested against DJA’s statement that the petition was “unlawful” and the lawyers had committed “contempt of court”.

“We’re also concerned that action was taken against the lawyers without a chance for us to act in response. Withholding that chance in a matter that concerns violations of the rights of a person is a filthy act,” he said.

Several of the lawyers involved had advocated and still advocate in the cases of high profile politicians. Throughout the suspension, the lawyers will not be allowed to plead their clients’ cases in court.

While lawyer Hisaan Hussain echoed Suood’s stance, the former Deputy Prosecutor General Ali Shameem, who had also signed the petition, noted that the suspension also infringes the rights of the lawyers’ clients who have ongoing trials at courts. He stressed that administrative action must only be taken against a lawyer after they close a case.

Wryly questioning how the petition could be deemed “unlawful” while the top court had not accepted it in the first place, Shameem added, “If gathering in front of the Supreme Court constitutes contempt of court, then it’s not only us; numerous people go there.”

Shameem further described the mass suspension of lawyers as an act of intimidation. He urged legal representatives to not be cowed by such shows of power, saying that to live in fear would not see any progress or improvements to the judiciary.