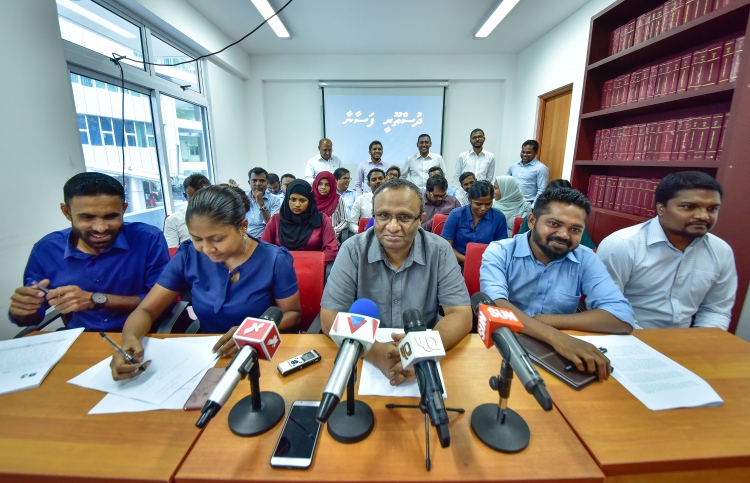 During the press conference held by lawyers who were suspended indefinitely over submitting a petition to the the Supreme Court raising concerns about the Maldivian judiciary. PHOTO: NISHAN ALI/MIHAARU

The lawyers, who are suspended over submitting a petition to the Supreme Court, proclaimed that they will not shrink away from their efforts to protect the legal sector, warning that more legal representatives will come together to lobby another petition to the top court.

A large number of lawyers had signed a petition voicing concerns over the judicial system of the nation, requesting the top court to address and bring solutions to all the obstructions and problems highlighted. While the Supreme Court had thrown out the petition, the Department of Judicial Administration (DJA) on Sunday night suspended 54 lawyers who signed the petition, marking the biggest mass suspension of legal representatives in the Maldives.

DJA declared that the lawyers had gathered unlawfully at the Supreme Court in a manner that obstructs the independence of the justice system and judges. The department further stated that the lawyers were in violation of the Judicature Act, lawyers’ pledge, regulations to prevent contempt of court, and the regulations of the Supreme Court, thus resulting in their indefinite suspension.

Former AG Husnu al-Suood speaks at the press conference held by lawyers who were suspended indefinitely over submitting a petition to the the Supreme Court raising concerns about the Maldivian judiciary. PHOTO: NISHAN ALI/MIHAARU

Speaking at a press conference held Monday afternoon, the former Attorney General and one of the suspended lawyers, Husnu al-Suood, stated that the petition was submitted to ascertain the rights of lawyers and ensure justice, as lawyers work closest with those seeking justice.

Reiterating his concerns over DJA issuing the mass suspension as opposed to addressing the issues stressed in the petition, Suood asserted that the lawyers will not back off.

“I’ll let you know that other lawyers apart from [those suspended] will submit another petition; this is endless. We shall keep working at it until we ascertain that justice will be served. As long as the Republic of Maldives exists, there will be someone to pursue justice even if we’re not there,” he said.

Suood also noted that another objective of the petition was to halt the injustices facing judges, accusing the Judicial Service Commission (JSC) of harassing judges in numerous ways. As an example, he pointed out that JSC has notoriously transferred judges between courts out of the blue, without providing said judges the opportunity to respond.

“Before a judge is shifted from one court to another, [JSC] has to look into whether a vacancy exists. But they have appointed six judges to the Children’s Court which is dealing with only 13 cases,” he said.

Prominent lawyer Hisaan Hussain stated that the action taken by the lawyers was not politicised, but simply an attempt to solve the concerns of citizens regarding the judiciary.

She further claimed that DJA’s abrupt decision to suspend the lawyers despite their petition being quashed by the Supreme Court clearly indicates that the issues highlighted in the petition are true. She noted that none of the lawyers had been questioned prior to the mass suspension.

Hisaan also stressed that the suspension, which forbids the lawyers from advocating, will greatly impact their ongoing cases at courts, thus infringing the rights of a wide range of people, including the lawyers’ clients who are either undergoing criminal trials or under remand.

Lawyer Mohamed Faisal echoed Suood’s statement that the lawyers will not waver in their cause to protect the judicial and legal sectors of the nation. Expressing concern over the actions of JSC which he described as “wrong”, he added that the cases of some lawyers, who were previously suspended, are still pending even after two years.