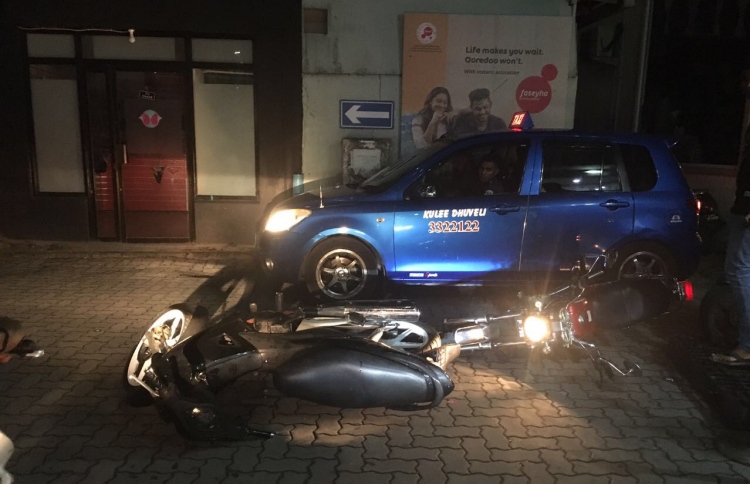 The two motorbikes that the culprits were on whilst they attacked the individuals; they were left a few meters away from where the incident occurred —

The three individuals who were arrested on Sunday in relation to the fatal stabbing that took place in the capital Male late on Saturday night were all “actively involved” in the incident, the police has revealed.

Moosa Ahmed who was just 19-years-old was stabbed to death with a knife, whilst another man, a 24-year-old, who was also at the scene, was injured in the attack which took place in Maafannu ward of the capital.

The police’s statement that was issued on Sunday said that it is investigating the incident “very seriously” and that the three individuals in custody were directly involved.

The police did not disclose any information regarding the three who were arrested.

Further, the police’s statement also revealed that a third individual, who is below the age of 18, was also harmed during the stabbing. However, it said that the boy was released from the state-run Indira Gandhi Memorial Hospital (IGMH) shortly after being treated, whilst the 24-year-old who was injured still remains at the hospital. His condition has since improved, the police added.

The knife that was used during the attack was left at the scene, whilst the two motorbikes the perpetrators were on were also found a few meters away from the scene of the crime.

The capital Male saw an escalation of violent crimes last July when two young men were killed in knife attacks on separate incidences. On July 27, 24-year-old Nadeem Abdul Raheem from Thakandhoo in northern Haa Alif atoll was stabbed in the head and killed whilst he was at a local café. Less than a week later, 25-year-old Mohamed Anas from Meedhoo in Raa atoll was stabbed 37 times inside Litus Service Centre.