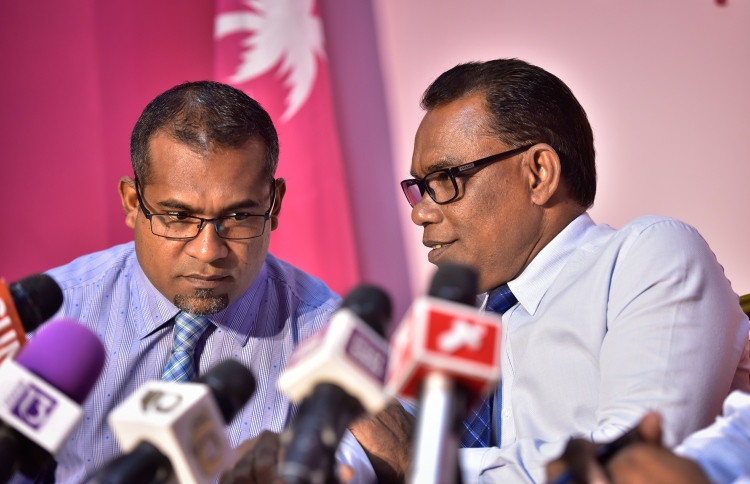 Ruling Progressive Party of Maldives (PPM) on Tuesday welcomed and congratulated the Department of Judicial Administration (DJA)’s decision to suspend 54 lawyers who signed the petition calling to uphold the rule of law in the Maldives.

DJA on Sunday night made history with the announcement that all the lawyers who signed the petition, which was submitted to the Supreme Court, would be suspended indefinitely. This is the biggest mass suspension of legal representatives in the Maldives to date.

Speaking to the press at PPM headquarters in capital Male, the party’s secretary general and Nilandhoo MP Abdulla Khaleel said that only the lawyers who aligned with a “certain ideology” and who worked to “promote that ideology” were suspended.

“I think they want the Maldivian judiciary to be an institution that would fulfil their needs and cater to their philosophies specifically,” MP Khaleel said.

The 50 lawyers who signed the petition lined up in front of the Supreme Court. PHOTO / MIHAARU

“The way I see it, the suspended lawyers were only working towards promoting this philosophy; a philosophy that disrupts the peace in this country.”

MP Khaleel had called DJA’s decision a “public service” to maintain the stability of the nation. Further, he denounced the allegedly “biased lawyers” and said that lawyers have a sworn duty to safeguard public interest.

He also criticised the lawyers’ approach of voicing their concerns: “The constitution clearly outlines the gateways to go about submitting concerns and complaints. There is a correct approach; there are relevant government institutions whose job it is to hear [their] arguments. Making petitions and taking the matter to the streets is not an approach practised anywhere else in the world for the sake of reform.”

The ruling party’s deputy leader and Fonadhoo MP Abdul Raheem also insisted that diverting from the correct procedures will result in the state taking action against them. He also praised DJA’s decision to suspend the lawyers and said that he fully supported it.

During the press conference held by lawyers who were suspended indefinitely over submitting a petition to the the Supreme Court raising concerns about the Maldivian judiciary. PHOTO: NISHAN ALI/MIHAARU

The lawyers’ petition expressed concern over the judicial system of the nation, and requested the top court to address and bring solutions to all the obstructions and problems mentioned.

DJA stated that the lawyers were in violation of the Judicature Act, lawyers’ pledge, regulations to prevent contempt of court, and the regulations of the Supreme Court, thus resulting in their indefinite suspension. Describing the petition as an unlawful document, and signing it as an act that interferes and puts pressure on the justice system while overstepping the procedures and rulings of courts, DJA further pronounced that it is investigating the issue and legal experts involved.