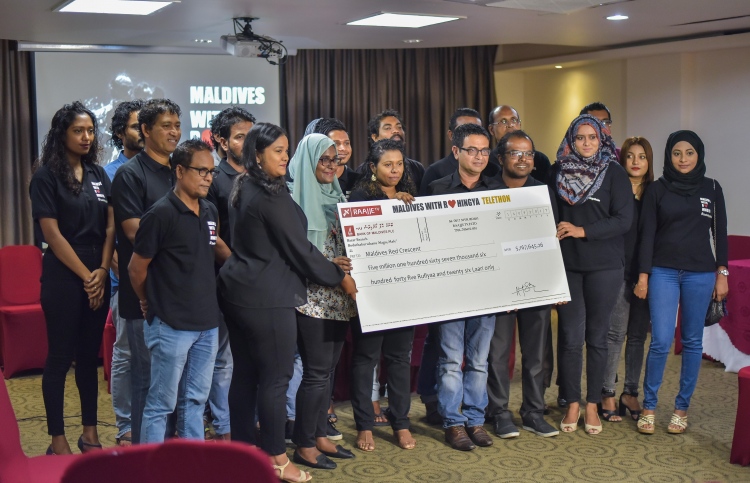 Staff of Raajje TV pose with a check of over MVR 5 million raised by the station to relieve the plight of the Rohingya. PHOTO: HUSSAIN WAHEED/MIHAARU

This marks the third time that the opposition aligned station has been fined under the contentious Freedom of Speech and Defamation Act.

According to Raajje TV’s COO Hussain Fiyaz, the station is being fined for broadcasting comments made by Thimarafushi MP Mohamed Musthafa against President Yameen on a programme.

MBC’s President Mohamed Shaheeb had revealed last Thursday, in a press conference held to mark Maldives Broadcasting Day, that the commission mostly received complaints of defamation over the past year. While MBC has probed 32 cases of defamation under the Act, Shaheeb had noted that Raajje TV has the highest count of offences.

The commission had first fined Raajje TV MVR 250,000 over a news broadcast. On the day Raajje TV settled the payment, it faced a second fine of a staggering MVR 1 million for broadcasting an opposition rally during which defamatory remarks were made against the president.

It also marked the first time that a news agency had been fined such a large amount under the Defamation Act, which came into effect October 2016 amidst outcry over curtailing freedom of media and speech.

Local cable TV provider Medianet was also fined MVR 500,000 earlier this year over its broadcast of the Al-Jazeera expose “Stealing Maldives”, a documentary exposing mass corruption, international money laundering and abuse of power in the Maldives.