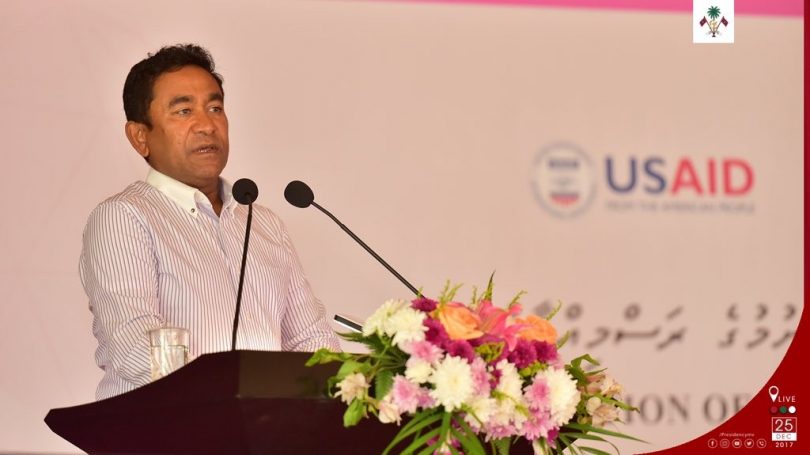 The United States Agency for International Development (USAID) has said that it is proud of the ‘successful’ partnership with the Maldivian government to provide ‘a safe and reliable water source for more than 4,000 residents of Hinnavaru island’.

President Abdulla Yameen inaugurated the USD 3.8 million safe drinking water system, funded by USAID and constructed by the United Nations Office for Project Services (UNOPS), in Hinnavaru island of Lhaviyani atoll on Monday. The system collects water from rainwater harvesting tanks, mixes it with desalinated water, and distributes it through a piped network to households on the island.

The system includes an 80-cubic meter/day capacity “reverse osmosis unit” housed in a facility partially powered by solar energy and complemented by a ground water filtration system that collects excess rainwater and directs it to the island’s aquifer, supporting the recharging of the island’s groundwater over time. To serve the water quality testing needs of Hinnavaru and nearby islands, the facility is also equipped with a regional water quality testing laboratory. Additionally, the facility includes space for utility staff daily operations

At the inauguration ceremony, President Yameen thanked USAID and UNOPS on behalf of the residents of Hinnavaru and all Maldivians.

“Our sincere and heartfelt thanks to @USAID, and @UNOPS; on behalf of the residents of #Hinnavaru and on behalf of all #Maldivians.” — #PresYameen pic.twitter.com/kIprzDqL9b

“We are proud to have supported a successful partnership with the government and people of Maldives to ensure safe and high-quality drinking water on one of Maldives’ most populous islands, through an integrated water supply and distribution system,” said Dr. Andrew Sisson, USAID Mission Director for Sri Lanka and the Maldives.

US Ambassador to the Maldives, Atul Keshap said that the project was part of America’s ‘long-standing commitment to the people of the Maldives and their continued prosperity, security, human rights, and democracy’.

The American people contributed $3.8 million via @USAID to ensure clean drinking water for the people of #Hinnavaru as part of our long-standing commitment to the people of the #Maldives and their continued prosperity, security, human rights, and democracy. https://t.co/06DD9GFNgZ