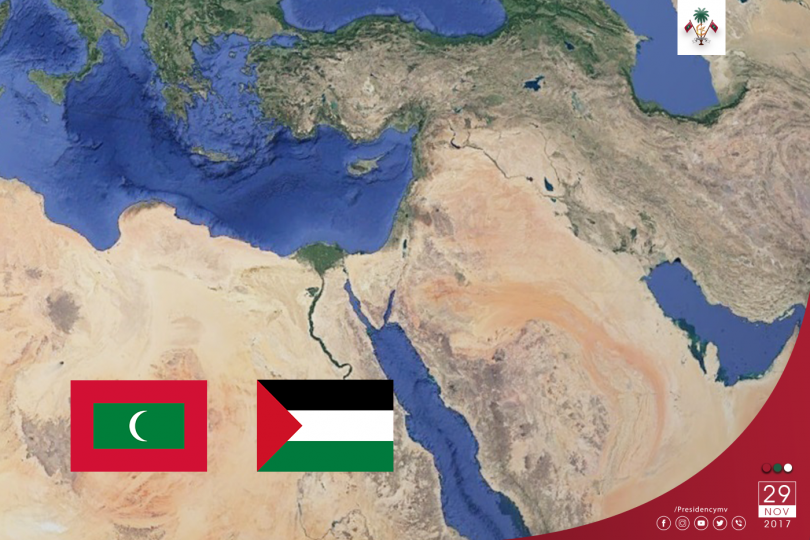 President Abdulla Yameen Abdul Gayoom has sent a message on the occasion of the International Day of Solidarity with the Palestinian People.

“The establishment of an independent and sovereign State of Palestine, with East Jerusalem as its capital, on the Palestinian lands with pre-1967 borders, living side by side with Israel, is the only solution and the only answer to the question of Palestine. That is the solution that the UN Security Council, in particular, Resolutions 242 of 1967, 338 of 1973, and 2334 of 2016, demand. The Maldives therefore calls on Israel to fully implement the relevant UN Security Council resolutions, to fully respect the legal obligations it undertook in the Oslo Accords, and to implement the Arab Peace Initiative and the Quartet Roadmap.”

“The Maldives and the Maldivian people will continue to raise our collective voice in support of a sovereign and independent Palestine in all multilateral fora and other international platforms. We support the efforts undertaken by the Palestinian leadership in pursuit of recognition by the international community, and its efforts to seek redress and justice through the international system. Finally, we strongly believe that a lasting peace can only be achieved through a negotiated final settlement by both sides that would end the cycle of violence and bloodshed, and allow for the viability of a two-state solution.”

“On this occasion, we hope for a swift resolution to this decades-old conflict, so that the suffering of the Palestinian people can be brought to an end. I wish to reiterate that the Maldives will continue to stand by the Government and the people of Palestine in their struggle for justice, peace, stability and prosperity.”