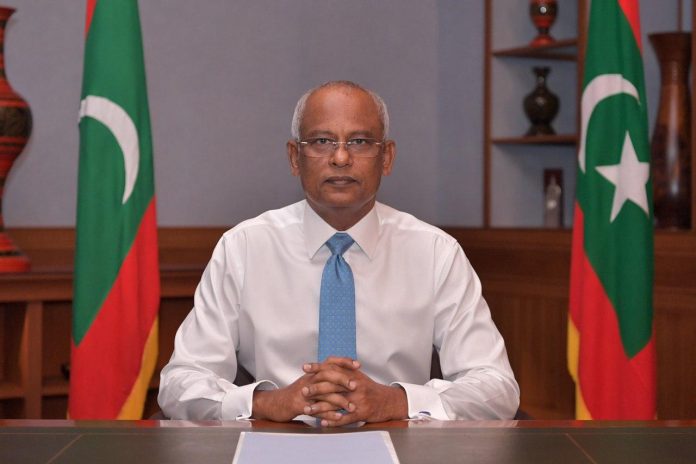 President Ibrahim Mohamed Solih has addressed the country tonight to update Maldivians on the country’s situation with respect to the novel coronavirus, COVID-19. During his remarks, the President outlined the Government’s plans for gradually easing the restrictive measures it has taken in response to the pandemic. These plans encompass gradually easing the lockdown in the Greater Male’ Region; allowing businesses to resume normal operations; reopening schools; and resuming communal prayer in islands where there are no COVID-19 cases. The President also remarked that the country could open its borders as early as July.

This gradual loosening of restrictions, he remarked, will occur in consultation with health authorities and will depend on the authorities’ confidence in the success of existing precautions. Further, the President emphasized that they are to be implemented in the context of a ‘new normal’ phase, in which individuals must continue to observe social distancing measures and strictly adhere to the advice of health authorities. He stressed that people should keep in mind that the gradual loosening of restrictions is not tantamount to the country becoming free of COVID-19 and that lowering caution could result in strict restrictive measures becoming necessary once again.

Speaking on current case numbers, the President noted that since the virus first began spreading within the country over a month ago, 1186 people have tested positive for COVID-19. Of these, 420 individuals are Maldivian nationals, and 766 individuals are foreigners; of these, 91 individuals have fully recovered from the virus. The President remarked that the virus had spread at a much slower rate than earlier statistical models had predicted. He noted that this has been the result of the Government implementing the recommendations of health experts, whom he praised for the many strides they have made in terms of treating the virus and tracing contacts.

The President acknowledged that the current ongoing restrictive measures taken by the Government in response to the virus, including an imposing full lock-down in the Greater Male’ Region, has caused many difficulties to both people and businesses. The President stated that throughout this period, the Government has placed a high priority on alleviating their burdens. Among other measures, the Government has provided financial assistance to households in need; allowed individuals to delay payment of their loans for up to six months, and provided much-needed relief packages for businesses. The authorities have also helped certain individuals stranded in either Male’ or in the outer atolls to return to their homes if absolutely necessary – though as the President emphasized, such movements must remain strictly controlled for now, in order to prevent the virus’ further spread throughout the country.

Continuing his remarks, the President also expressed his deepest gratitude towards frontline workers, including medical professionals, the Maldives Police Service; the Maldivian National Defence Forces; and volunteers from organizations such as the Red Crescent, for their tireless efforts to help contain the virus and keep households provisioned. The President ended by offering his prayers that the country is made free of the menace of COVID-19 and that it can return to normal life as soon as possible, with the blessings of God.