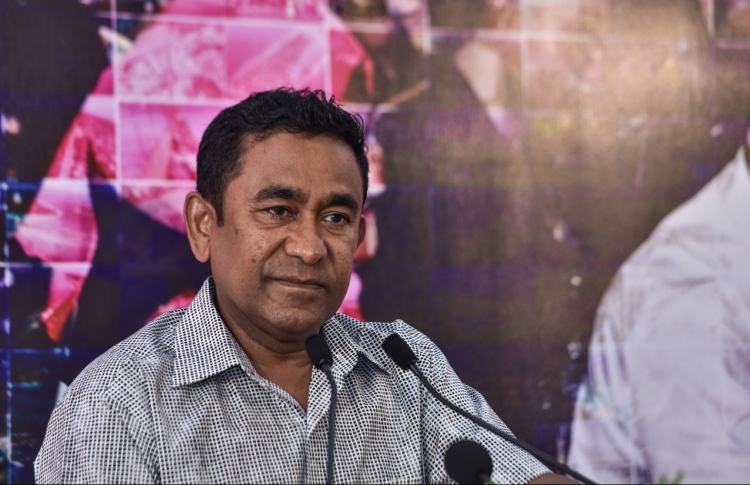 The president had dubbed Nasheed as the individual who paved way for corruption and disharmony in the country.

Speaking at the meeting held to inaugurate Progressive Party of Maldives (PPM)’s new party hub in the western end of the capital Male, Yameen had refuted claims about the increase of “political prisoners” during his regime.

He insisted that every citizen is equal before the law and that the political leaders who are currently in prison are facing the consequences of their actions.

“It may be an attempt to assassinate the president, it may be keeping weapons in [their] homes, or taking to the streets and attempting to stage a coup to topple the government,” the president said, obliquely referring to his former Vice President Ahmed Adheeb, his first defence minister Mohamed Nazim, and former President Mohamed Nasheed, respectively.

Taking a dig at Nasheed specifically, Yameen alleged that his opponent had little regard for due procedure and claimed that the former president had arrested several politicians during his presidency, even going as far as to “kidnap” a judge.

Yameen continued on to claim that Nasheed had brought unfavourable changes to the democratic practices in the Maldives and blamed him and his “cronies” for taking away the trust Maldivian citizens had in its government.

Talking about the religious scholars who vouched for Nasheed during his initial run for the presidency, Yameen said that they had turned their back on Nasheed’s predecessor former President Maumoon Abdul Gayyoom after claiming that he no longer safeguarded the Islamic principles in the country. He added that these scholars, even then, “knew what kind of person Nasheed was fundamentally.”

The president went on to make serious allegations against Nasheed during his speech, saying that the former president had invited foreign delegates who were banned from the Maldives for being missionaries, to witness his presidential inauguration. He claimed that Nasheed had invited such individuals later during his presidency as well.

Going back to the alleged unfavourable changes that Nasheed had brought, Yameen said that he brought along cultural changes and that Maldivians have forgone the traditions they once practised such as being respectful towards the elderly, and that Maldives has become a “darker” place for the citizens.

“He changed how the youth behaved,” Yameen said. “He made the youth do his bidding and found a way for them to carry out all sorts of illicit activities that would have definitely earned them jail time. Maldivian youth plummeted into a frenzy of drug abuse and violence during his regime. Is that the change he wanted to see?”

During his passionate speech at the ruling party hub opening, Yameen had also listed the things that Nasheed had failed to do, which included establishing a proper healthcare system, improving the education system and building relations with other Muslim countries.

While the opposition maintains that Nasheed was ousted in a coup just three years in to his presidency on February 7, 2012, the ruling party leaders categorically refers to Nasheed as the “president who voluntarily resigned.”