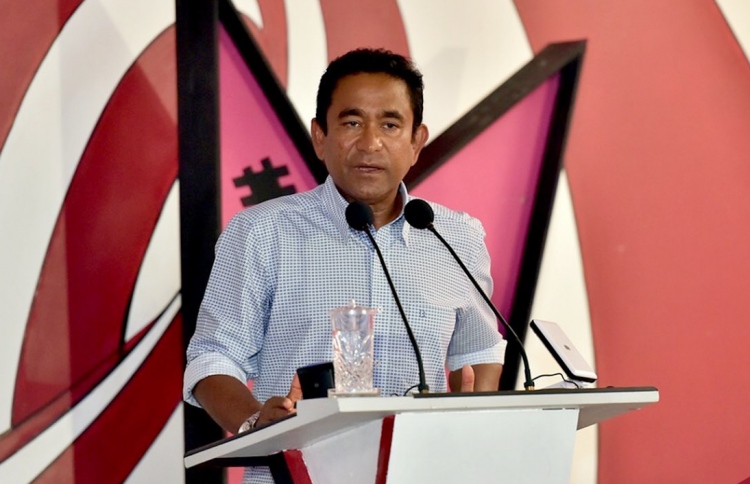 President Abdulla Yameen on Tuesday night declared that even though he is willing to work with the opposition parties, he would not let them “bury him”.

Speaking at a campaign rally held in Villingili in the southern Gaafu Alif Atoll, the president reiterated his call to open dialogue with the opposition parties, but maintained that he cannot be easily ousted or brought down.

“We were elected through a lot of hard work by a lot of people. Someone who was a close, respectable ally has recently gone behind a podium and said that the reason they supported me was because I was willing to hear out the opposition’s side. And I have maintained that I am willing to work with the opposition – this much is true. But I have never said that I will stand idly by if the opposition plans to overthrow me, or bury me,” President Yameen said.

The president said he is open to work with any ideology, as long as it upholds the intrinsic values of Maldivian citizens.

“Why can’t we work with parties that are close to us? If anybody comes to [us] with the same goal of bettering the lives of Maldivians, I am willing to work with them. We have invited the opposition to have talks with us for this reason.”

Speaking about the Villingili constituency, President Yameen said that a main concern that was brought to him during his visit to the island was the lack of a representative from the far south that would bring the locals’ grievances to the president directly.

In this regard, President Yameen said that it is important to elect a ruling Progressive Party of Maldives (PPM) member to the currently disputed Villingili seat of the parliament. The president was confident of winning the by-election for the constituency, saying, “A PPM member will sit in the parliament’s Villingili seat.”

The president and the first lady, Fathmath Ibrahim, are visiting the southern Gaafu Alif and Gaafu Dhaalu atolls, campaigning for the disputed Villingili constituency of the parliament.

MP Saud Hussain had initially represented the Villingili constituency in the parliament. However, his parliament membership was challenged after the Supreme Court issued a ruling in July, which stated that any parliamentarian who crossed the floor would be disqualified. It had later clarified its ruling saying that it cannot be applied retroactively. With the Supreme Court’s ruling, the Elections Commission had announced by-elections for six constituencies – including the Villingili constituency. However, four of the ‘disqualified’ MPs had challenged the Elections Commission’s decision and maintained that they cannot lose their seats as they were ousted from their original parties before the Supreme Court’s ruling. When the MPs took the matter to the top court, it had upheld it’s previous ruling, and it was widely regarded as ambiguous, with both the opposition and ruling parties celebrating the ruling.

The MPs who have allegedly been disqualified have since asked the apex court to clarify its ruling again.

Whilst PPM has begun its campaign for the by-elections of these constituencies, it has not officially announced the candidates who will be contesting on behalf of the party.