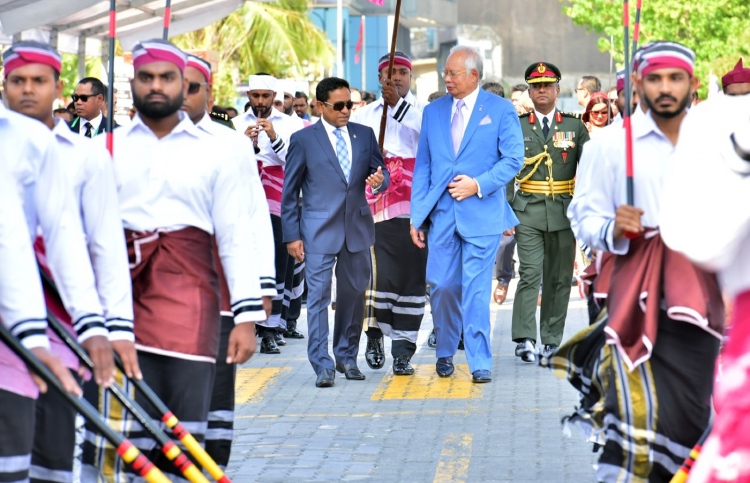 President Abdulla Yameen on Wednesday praised Malaysia as a reliable and steadfast supporter of the Maldives and expressed hopes to see investments from Malaysia in the future.

He made the remark in a joint press statement with Malaysia’s prime minister, Najib Razak, after holding official talks between the governments of both countries at the President’s Office.

The Malaysian prime minister and first lady Rosmah Mansor are currently on an official visit to the Maldives at the invitation of President Yameen and first lady Fathimath Ibrahim.

Speaking at the press briefing, Yameen thanked Razak for Malaysia’s contributions to the socio-economic development of the Maldives. Stating that he wished to see investors from Malaysia seize opportunities in the Maldives, Yameen revealed that both nations have agreed to set up a system to promote business, trade and investment cooperation, and enhance collaboration between private sectors.

Yameen also addressed the four agreements that were signed between the Maldives and Malaysia early Wednesday. Focussing on the areas of education, health, culture and civil defense, the agreements seek to strengthen bilateral relations between the two countries.

In his statement, Yameen further shed light on the discussions between the two governments. Highlighting that youth development is a priority of his regime, he revealed that the Maldives discussed with Malaysia regarding youth exchanges, especially in the area of sports, and that both nations agreed to collaborate on youth empowerment.

The president went on to note that Malaysia provides exceptional education opportunities for Maldivians seeking higher studies, and stated that the agreement signed earlier that day on cooperation in the field of higher education would facilitate more opportunities for the Maldives.

Furthermore, Yameen declared that the two countries exchanged views on climate change and sustainable development. He asserted that the Maldives and Malaysia would work closely to implement the commitments they undetook in Paris in 2015. He also assured Razak that the Maldives would remain committed to the cause as the chair of Alliance of Small Island States (AOSIS).

Yameen added that he and Razak also discussed the issues of terrorism, violent extremism and radicalization, proclaiming that both have agreed to redouble joint efforts to counter the threat of terrorism.

Speaking at the press conference, Razak assured his commitment to strengthen the close relations between the Maldives and Malaysia.

This is Najib Razak’s first official visit to the Maldives as the Malaysian prime minister. President Yameen has visited Malaysia twice since assuming office in 2013.