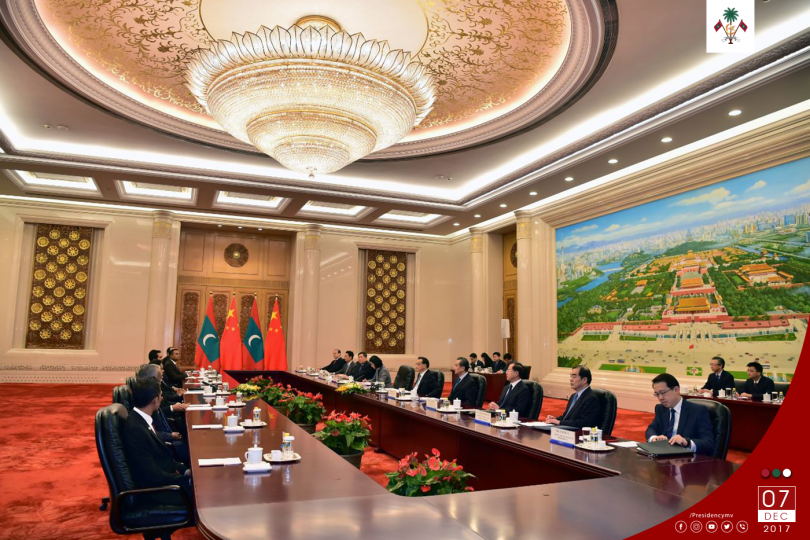 Premier of the State Council of the People’s Republic of China, H.E. Li Keqiang, has paid a courtesy call on President Abdulla Yameen Abdul Gayoom this afternoon, at the Great Hall of People, China. The President and First Lady are currently on a State Visit to China, at the invitation of the President of China, His Excellency Xi Jinping.

Speaking at the call, President shed light on the fact that this year marks the 45th anniversary of the establishment of diplomatic relations between the two countries and stated that China-Maldives friendship is at new heights. He also stated that the bilateral relation between the two countries displays how a big country and a small country can work together with mutual respect, to attain greater objectives.

Moreover, the President emphasized that President Xi’s state visit to Maldives in 2014 has further strengthened and elevated the close bilateral relations between the two countries, and shows the commitment extended for the enhancement of the strong ties between the Maldives and China.
During the call, President Yameen also highlighted that the Chinese tourist visits has increased over the past few years, and expressed his appreciation for the Chinese tourists’ contribution to the Maldivian economy.

During the call President Yameen briefed the Premier on the ongoing Bridge project and the Velana International Airport project.

Speaking at the call, the Premier shed light on the strong bilateral relations that exist between Maldives and China, and assured of China’s continuous support in the economic development of the Maldives.
President Yameen and the Premier of the State Council of China expressed confidence that the two countries will continue to work together both bilaterally as well as on the regional and international issues of mutual concern, to enhance the existing ties of friendship and cooperation between the two countries.

During President Yameen’s State Visit official talks was held between the Government of Maldives and the Government of China – and key agreements were signed with a view to enhance trade, professional and socioeconomic development as well as Technological and other collaborations between the two countries. The President also met with key leaders of China, and discussed ways to further accelerate socioeconomic ties between the Maldives and China.