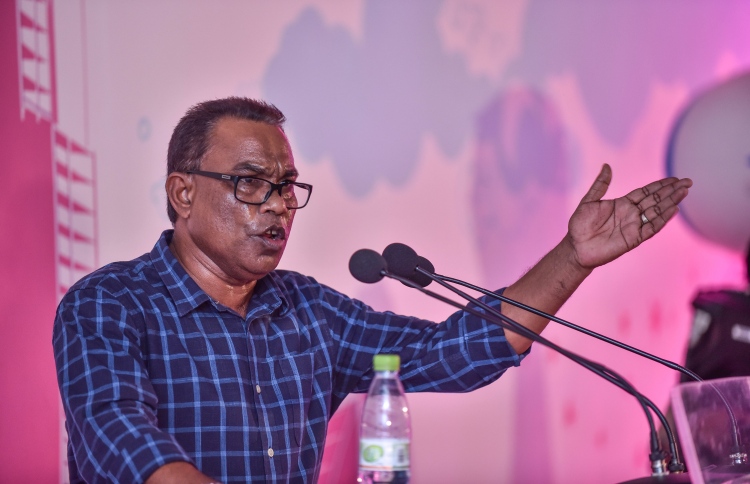 Speaking at PPM’s main party hub in capital Male, the deputy leader of PPM had responded to several accusations the opposition has been making against the government.

He referred to personal experiences he had with former President Maumoon and claimed that he was arrested and sentenced unlawfully, without even providing legal grounds for his arrest.

The opposition, therefore, cannot sincerely advocate against the alleged unconstitutional acts carried out by the government, MP Abdul Raheem claimed.

“I was kept in prison for three months and 18-days. I was under house arrest for a year and two months. And then I was sentenced to exile for 12-years and five months. So, where is the justice? I was taken to a place called ‘Police Court’ and told that the state has levied these charges against me,” MP Abdul Raheem said.

“This ‘Police Court’ had just sentenced me to 12-years and five months of exile, without even giving me a fair trial. What grounds do [they] have to talk about ‘justice’?”

President Abdulla Yameen during a PPM rally held at the party’s main hub in the capital Male. PHOTO / MIHAARU

The Fonadhoo lawmaker claimed that President Abdulla Yameen is the only president in the Maldives to ever investigate corruption allegations made against his own government. He had referred to President Maumoon again and said that, despite the numerous graft allegations that were made against him, he had never taken the initiative to investigate any them.

PPM’s deputy leader further insinuated that the opposition coalition, with its new allies, is trying to bring back archaic traditions that took place in the parliament when the new constitution was being drafted, and encourage favouritism and bias amongst the members. The government would not allow any such acts to take place, and the opposition cannot firmly accuse the president of not maintaining justice, he said.

“[The opposition] are claiming we are ‘inhumane’. But what is being inhumane? Is it building all these new flats? Is it building the bridge between Male and Hulhumale?” MP Abdul Raheem said.

Responding to MP Abdul Raheem’s accusations, the former president claimed that he did not know why the Funadhoo MP was exiled during his presidency.

President Maumoon said that things were “not as they are now”, and that he personally does not follow up on trial procedures, nor was it his duty to oversee them. He maintained that he did not specifically know why MP Abdul Raheem was arrested, or sentenced during his presidency.

Earlier this month, President Maumoon had claimed that he is still the leader of ruling PPM, after MP Abdul Raheem raised concerns about the former president still using the title of “PPM leader” on official platforms. President Maumoon had declared that he was elected with a clear majority of the party’s national congress and that he will remain as the party’s leader until the party officially votes to remove him.