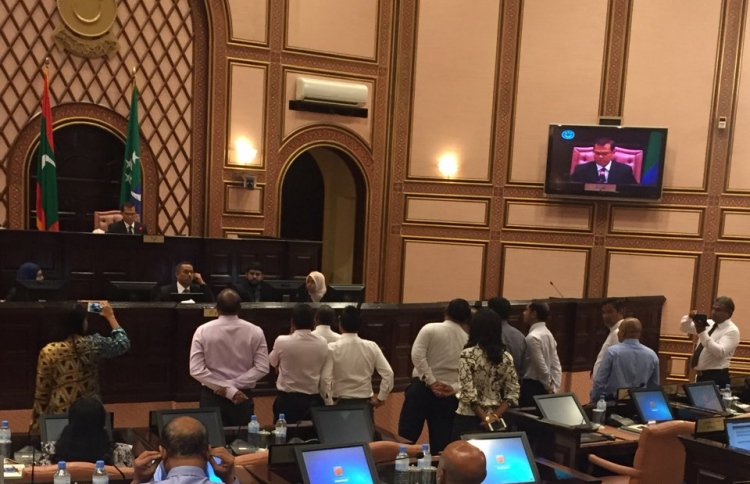 Speaker Abdulla Maseeh addresses the first sitting of 2017’s third term of the parliament from his elevated seat behind a wooden “wall”, while opposition lawmakers protest and call on him to step down. PHOTO/MAJLIS

The parliament held its first sitting of the third term early Monday, ending the session within an astonishing 13 minutes.

Monday’s sitting marked a lot of firsts for the parliament, such as lawmakers being prevented from entering the chambers prior to the speaker, and Speaker Abdulla Maseeh chairing the sitting from behind a wooden “wall”.

In the wake of the latest parliament sessions prior to recess, all of which had turned out chaotic with opposition lawmakers loudly protesting, the third term began with parliament security blocking all the gates to the parliament house. While lawmakers were previously allowed to enter the chambers 30 minutes before sessions commenced, security on Monday barred entry to parliamentarians until the speaker had taken up position.

Lawmakers entered the chambers to discover that the tables of the speaker and administration had been raised over the past one-month recess. They are now separated from the rest of the chambers by a wooden “wall” that stand five-feet high.

While opposition lawmakers once more protested, with some of the members standing on their chairs in front of the “wall”, Speaker Maseeh had concluded the sitting after passing a single amendment to parliamentary regulations.

The amendment was passed with 28 votes in favour from members present at Monday’s sitting. The protesting opposition MPs did not participate in the vote, and some of them admitted that they did not know which amendment was submitted as they could not hear the speaker’s address over the shouting.

Unlike previous sittings, Speaker Maseeh had worn earphones to block out opposition MPs’ protests. He ended the sitting after urging the members to prepare for next year’s state budget.

Speaking to reporters after the session, Addu Meedhoo MP Rozaina Adam said that the members were allowed to enter the parliament house only after Speaker Maseeh sat upon “his throne”.

Lawmakers of the opposition coalition were calling on Maseeh to step down, as they had been doing during the last several sittings. The opposition MPs’ protests had begun after the parliament quashed their last censure motion against the speaker.

The joint opposition had submitted a petition seeking a motion of no confidence against the speaker with 45 signatures. However, following a contentious Supreme Court ruling on anti-defection in July after which the Elections Commission declared four of the MPs that gave their signatures as having been unseated, the parliament had quashed the petition, saying that the number of “valid” signatures were now fewer than the required minimum of 42.

Opposition lawmakers, however, refuse to recognize the disqualification of the unseated MPs, and they maintain that parliament sittings cannot be allowed under Maseeh’s watch until a vote is taken on the censure motion.