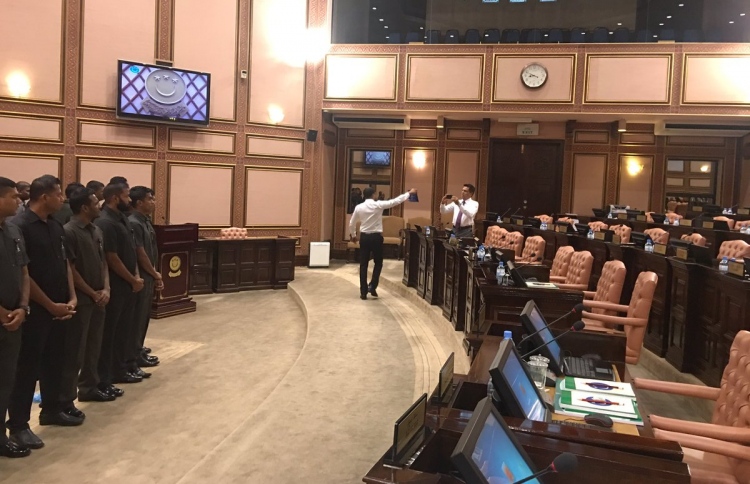 The parliament on Thursday approved to appoint Ahmed Naseer as the governor of Maldives Monetary Authority (MMA).

Thursday’s sitting was also conducted amongst chaos as opposition lawmakers continued to protest against Speaker Abdulla Maseeh chairing the session. The parliament passed Naseer as MMA’s governor with 33 votes in favour from ruling coalition MPs. Opposition lawmakers did not take part in the vote.

The parliament session again was conducted under high security with several security officers surrounding the speaker’s seat while lawmakers of the ruling coalition and joint opposition exchanged heated verbal fights.

The dispute continued outside the parliament chambers even after Speaker Maseeh concluded the final sitting of the second term and the parliament officially went into recess.

The third term of parliament for this year will commence in October.

Ever since the parliament administration recently quashed the opposition’s third motion of no confidence against Speaker Abdulla Maseeh, the opposition MPs have been declaring that they would not allow any sittings chaired by Maseeh. The lawmakers had filed the impeachment motion with 45 signatures, including 10 from defecting lawmakers from ruling Progressive Party of Maldives (PPM). However, following a rushed Supreme Court ruling on anti-defection which resulted in four of the PPM lawmakers being unseated, the parliament administration had declared the no confidence motion invalid as the number of signatures had dropped below the required minimum of 42.