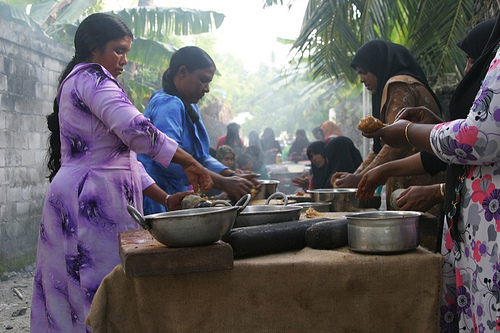 After just three years of economic transition, Maldivian democratic transition has come to an abrupt end. All recently introduced democratic rights and practices are being eroded daily. In order to deflect blame, autocratic leaders often use anti-colonial rhetoric. Thus, the international system is a continuation of European imperialism, says Maldives’ President Abdulla Yameen. The international community’s admonitions for the country regarding international democratic practices stem from their “envy” of Maldivian sovereignty and faith.

“Undoubtedly, the biggest challenge to our national unity in our contemporary history was the failed attempt, encouraged by a foreign power, to create a breakaway republic comprising of the three southernmost atolls in the country”, the president stated at the ceremony held to mark the 51st Independence Day.

President Yameen equates attempts by Maldivians who oppose authoritarianism and work with the international community to revert to democratic rule with “working against Maldivian sovereignty”. The narrative of Muslim co-conspirators in the attempts to cause loss of sovereignty converge with Takfiri ideas that legitimize intra-Muslim violence: “It was not surprising that a few Maldivians were, yet again, involved in this plot”, he continued.

In President Yameen’s rhetoric, the international community is putting pressure on the Maldives because it is “a Muslim country”. He claims “they” want to “cultivate cultural norms and so-called values that are alien to and frowned upon by our Islamic faith.”

It is ironic that postcolonial rhetoric is being used to re-invent new methods to enslave the majority of the population. The government consistently deploys the façade of democracy to achieve these means, using lawmakers and judges under its payroll. Ensuring that the overwhelming majority of the Maldives remains invisibilized, and that its riches are only accessible to a small percentage, is beneficial to the ruling elite. Leaving the masses under abject poverty enables easy manipulation of local politics. For instance, elections in the Maldives can be reduced to countrywide business transactions where the elite with accumulated wealth of decades can buy-off the less privileged majority.

Oppressing the masses using economic exploitation and exclusion has been a practice used by successive Maldivian governments. From 1984 until 2009 any form of tourism was illegal on inhabited islands (of which there are approximately 200), while uninhabited islands (of over 1,200) were given away for tourist resort development.

These moneymaking islands continue to be awarded to enrich those loyal to Maldivian regimes in power, or as a means to silence budding dissidents. The ability to amass wealth through these pristine islands are now not limited to the Maldivian oligarchy alone.

In the late 1970s, the restructuring of the Maldivian economy through the rise of luxury tourism further exacerbated socio-economic disparities between the vast majority and the autocratic elite in the capital. Majority of Maldivians were excluded from directly capitalising on this lucrative economic pie.

Power relations that determine the distribution of wealth, however, are excluded from the rhetoric of the rulers. A recurring theme is to, instead, blame it on the influence of the Other. President Yameen, for example, has repeatedly asserted that the Maldives has not been able to achieve economic progress because of the “bitter outcome of so-called attempts at improving” freedoms, liberties and human rights—“Western concepts” alien to “us” Maldivians.

Paradise for tourists; hell for the subaltern

Although the Maldives’ luxury tourism industry is ostensibly segregated from the country’s politics, their connections run deep. In 2008, the Maldives began the project of democratisation with a new Constitution following street protests calling for democratic reform in September 2003 and August 2005. A modern tax regime was introduced, and tourism on inhabited islands was decriminalised to alleviate the widening socio-economic gap.

The Tourism Goods and Services Act and Business Profit Tax Act enacted in 2011 were direct threats to the king-making oligarchy that enjoyed a carpe diem attitude over the nation’s wealth. In February 2012 the first democratically elected Maldivian president, Mohamed Nasheed, was forced out by a military coup supported by a cabal of dictator-loyalists with alleged funding from resort-owners.

The Yameen administration has been able to accrue wealth and distort the equal distribution of it at an unprecedented scale in the Maldives. In October 2014 the independent auditor general flagged the state-owned tourism promotion company for corruption of US$6 million. In response, the auditor general was abruptly removed by the ruling-party dominated parliament.

A special audit five months later indicated a further US$79 million was embezzled after the former Auditor General’s warning. Of this grand theft, US$65 million were acquired as acquisition costs for uninhabited islands and lagoons leased for tourism. These funds were fraudulently siphoned off to private accounts. The former top auditor later estimated the total amount in damages to the state to be over MVR3.5 billion (US$226 million). Although former Tourism Minister and Vice President—directly under the President’s supervision as his protégé—was made the fall guy for the entire scandal and has been jailed for over 30 years on multiple counts, all the dirty deals that resulted from the dirty deals remain valid. To further enable illicit enrichment of a few, the government recently revised tourism laws to formalize the very practices that enabled the corruption, in essence legalising the methods which allowed the largest corruption in the country.

The pervasive form of a country’s national identity and its nationalism is determined through many geopolitical factors. Experiences nations have with the outside world; more importantly with its perceived “Other” generates a deep impact on a community’s consciousness. Identity signifiers such as culture and religion play into this mix of identity politics.

The Maldives’ status as a British protectorate from December 1887 to July 1965, its subjection to Portuguese occupation in the 16th Century (1558-1573), and instances of invasions from south India affected the transformations of Maldivian national identity. Historical records show that in addition to Dutch, Portuguese and British forces in the Indian Ocean, the small Muslim island nation suffered attacks from the southern coast of India. In 1609, Malabars who helped liberate the Maldives from the Portuguese in 1573 attempted to conquer the islands during Sultan Ibrahim Iskandar’s rule.

Another invasion came 81 years later, and again in 1752. A new reality to these Indian invasions was the involvement of Maldivian collaborators who had fallen out with the ruling clan.

President Yameen described the secessionist movement in the south of the Maldives as the “biggest threat to national unity”, although British imperial ambitions in the Maldives were limited to its strategic location due to a lack of natural resources. Infighting among Maldivian royal families and domination of trade by Borah traders with the help of Imperial Britain paved the way for the Maldives to become a protected state.

Two decades after Britain established a naval base in Addu Atoll, the islanders seceded and the short-lived United Suvadive Republic (1959-1963) was formed along with two other atolls from the south. Islanders resisting the centralized government were violently uprooted and the secessionist movement was brutally suppressed by the Ibrahim Nasir administration (as Prime Minister from 1957 to 1968 and as president from 1968 to 1978).

In February 1960, Britain brokered a deal with the Maldivian government securing the naval base in the south for another 30 years. At this point solidarity with the liberation of the south was no longer within its interests. When Britain began to encourage an end to self-rule, secessionists had to then resist the unconscious tool of history that helped ignite the liberation movement.

After forcibly depopulating natives of the Chagos Islands to establish a joint military facility with the United States, a naval base a few hundred kilometres away in the Maldives was not exigent for Britain by the early 1970s.

Virulent nationalism is used to gain partial consent of subjects, to detach their grievances from the real site of oppression, injustice and economic exploitation. Ordinary Maldivians are dehumanised through indigenous structures of exclusion and discrimination that has manifested in government policies.

Maldivian writer Muna Mohamed’s book, Falhu Aliran Muiy highlights how development policies have historically been solely focused around the capital. She argues that inhabitants of the outer islands are being forced into internal displacement due to reclamation of new islands for development while leaving existing inhabited ones underdeveloped.

Most of the islands in the outer atolls still consist of ghost towns with highly restricted availability of public services. The book suggests that the causes of underdevelopment and forced internal migration are not just born out of climate change and natural disasters, but through concentrated efforts by successive governments.

Since President Yameen assumed power in late 2013, virtually all of his public appearances send out a clear message: harsh punishments and vengeance are endemic to Maldivian culture; it is the lifeblood of Maldivian Islam. President Yameen, the brother of former president Maumoon Abdul Gayoom (1979-2008), envisions a population that is docile with an unflinching submissiveness when Islam is raised. In his view, the end to the de facto moratorium on the death penalty is designed to bring the country’s “youth back to the right path”.

Given the Maldives’ current human rights record, the only nations that provide development aid without criticism are China and Saudi Arabia – both with its own distinctive imperialist agendas. The Yameen administration’s selective anti-imperialism is exposed due to the incontrovertible link between its development goals and the two undemocratic world powers.

Authoritarianism and religious conservatism are projected as necessary civilising forces, independent from “the West”, weaving liberalism and freedom into narratives of “Western decadence”. The fact that the unpopular government has resorted to employing a public relations firm and law firm from the US and UK—to shield its rampant human rights abuse and corruption—is conveniently left out.

Even if the government has spoken out against violent jihad, the brand of nationalism it constructs has undeniable and uncomfortable similarities to Salafi-influenced anti-Western doctrine. The government commonly evokes the notion of a Western conspiracy to undermine Muslim communities using democracy, human rights and secularism, as well as accusations of the opposition, journalists and civil society actors being “native informants”. The Maldives are popular for its natural beauty, but the country is increasingly becoming known for its violent extremists fighting in Syria and Iraq.

Using this brand of anti-imperialism that does not include Saudi Arabia and China as imperial forces, President Yameen has managed to dismantle the nascent democratic framework. His mission to reinstate autocracy in the Maldives is now complete. The parliament continually derogates rights and emphasizes restrictions.

Freedom of expression, which is indivisible from other rights; freedom of thought, right to access information, press freedom, freedom of assembly and freedom of association; has been criminalised through legislative means. Again, religion and terms undefined under the Act, such as “societal norms” were used to curtail free speech. The right to freely hold assemblies without prior permission has recently been abrogated, requiring prior permission from the police. All recent trends signal a return to the Maldives’ long experience with one-party rule under a totalitarian state.

About the author: Mushfique Mohamed is a human rights lawyer. He has an LLB (Hons) Law and MSc(Econs) in Postcolonial Politics from Aberystwyth University.