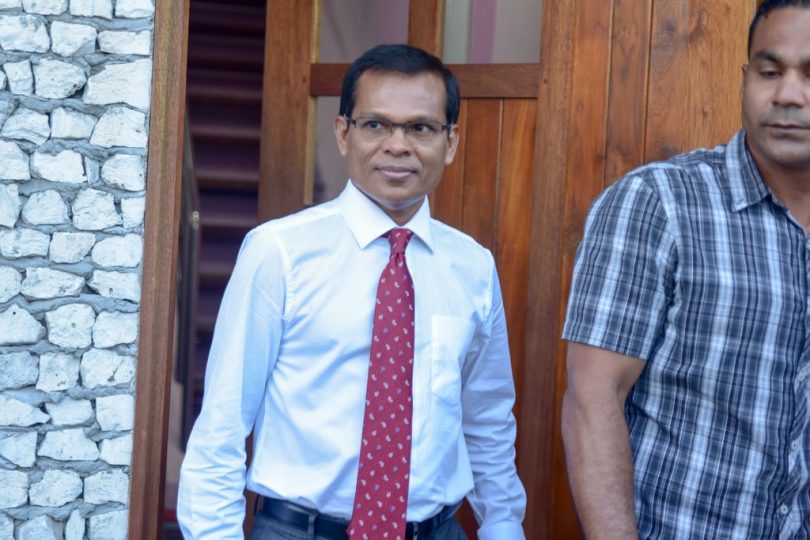 The original Dhivehi article was published on the avas.mv website on14th March 2017.

Since the beginning of the first term of the Parliament this year,  9  sittings were held. One after the other, bills were tabled and important amendments brought to several laws. However, rather than continuing the official work of the Parliament, the focus of the opposition is entirely in another direction. When President of PPM Maumoon distanced himself from the ruling party, the opposition is seizing the opportunity to take over the power the government has in the Parliament. To achieve this they have yet again proposed a vote of no confidence on the speaker Abdullah Maseeh Mohamed. What lies behind this? Is this yet again another plan by the opposition to destabilize the country politically?

Hopes of the opposition may have risen slightly as now there are two to three members straining out of PPM and supporting  Maumoon. There are also people who are saying that this is an idea that is coming from the agenda of jealousy by the former President Maumoon

” There is no basis for the proposal against Maseeh. This is something to end the peace and stability of the country we are now experiencing. As this was led by a member who claims to be a PPM member,  it is clear whose hand is underneath. I would say this is an act planned by the opposition along with President Maumoon’s participation” a leading member of PPM said.

The big question remaining now is, can they win a vote of no confidence against Maseeh? A political arena is a deep place where sometimes the currents change so unexpectedly. From a place with a majority of the government, it is not difficult to estimate the result when you sum up the numbers. Rules of the Parliament say that to pass a no confidence motion the majority present at that sitting is required. In recent times, on an average government gets more than 40 votes and the votes for the opposition do not exceed 30 votes. So the question is with the two to three members of Maumoon will there be a change in this result?

When we look at the composition of the Parliament, PPM has 48 members. MDP has 21 members, Jumhooree Party has 7 and MDA has 6 members. The others are one member from Adalat and two independent members.

From PPM it is anticipated that Dhiggagru member Faris Maumoon, Thuludhoo Constituency member Mohamed Waheed, and Thimarafushi member Mohamed Mustafa will vote against Maseeh. These three members support President Maumoon and they have been openly advocating for a vote of no confidence on Maseeh. Then MDP’s 21 members and Jumhooree Party’s 7 members and MDA’s Nolhivarumu Constituency member Hussain Areef will also vote for the no confidence motion against Maseeh. From the independent members, South Galholhu member Ahmed Mahloof is in jail so his participation in this vote is questionable. And when the call for the vote against Maseeh is tabled the session will be chaired by Hulhuhenveiru Constituency member and he can only vote if the votes go to a draw.

Even if members vote as above, the calculation shows that only 33 votes will be for the motion and 50 will vote against. And due to any circumstance if the members who previously have shown support to Maumoon: Dhidhoo member Abdul Latheef  Mohamed, Baarashu  member Ibrahim Sujau, Eydhafushee member Ahmed Saleem and Thinadhoo member Saudullah Hilmy take that side they still cannot win the vote to remove Maseeh. There will be a difference of 9 votes. Sujau , Latheef, Saleem and Saud are supporting the government again and they are open against the ouster of Maseeh.

“This is something the opposition is doing with the intention to make life difficult for Maseeh and to weaken the government. There is no room for this. As we have defeated such votes before we will again defeat this motion” PPM PG leader Ahmed Nihan Hussain Manik said.

However, the opposition is also assuring that they will oust Maseeh. In this context,  in an interview to Raajje Tv  Faris said they already have the 42 members needed from the 85 members of the Parliament and is sure of winning this vote.

But from the numbers, there is no such formula. Why are they trying this when they know they cannot win? Some PPM members say that ending the focus of large investments to Maldives is what the opposition aims. They want to portray to foreign countries that the Maldives is a politically unstable and unsafe place. Especially obstructing the possible investments that may come along with the Saudi King’s state visit is one of the reasons. Also showing the foreigners that the opposition also yields power.

” Mostly we perceive that this is an attempt by the opposition to destabilize the country in time for the visit of the Saudi King or they are scared that the mega project President Yameen is bringing to Faafu Atoll may succeed and since they can’t do anything about it, a useless act just to make noise. Some foreigners see that by now the political arena is stabilizing. And also the laws are now making it easier for investments and investors are hungry to invest. Their aim is to make a loud noise to stop this.” A PPM Parliament member said.Anyway, the no confidence motion is tabled to be voted on the 27th of this month. Under the rules of the Parliament, any other matters can only be discussed after taking a decision on the speaker when such a motion is proposed.  Maseeh will have the right to defend himself. While the opposition dreams of winning the vote to oust Maseeh it is impossible due to many reasons. And what the opposition hopes to achieve is to bring the Parliament into a disarray and keep the Parliament from functioning.

Anyway, the no confidence motion is tabled to be voted on the 27th of this month. Under the rules of the Parliament, any other matters can only be discussed after taking a decision on the speaker when such a motion is proposed.  Maseeh will have the right to defend himself. While the opposition dreams of winning the vote to oust Maseeh it is impossible due to many reasons. And what the opposition hopes to achieve is to bring the Parliament into a disarray and keep the Parliament from functioning.