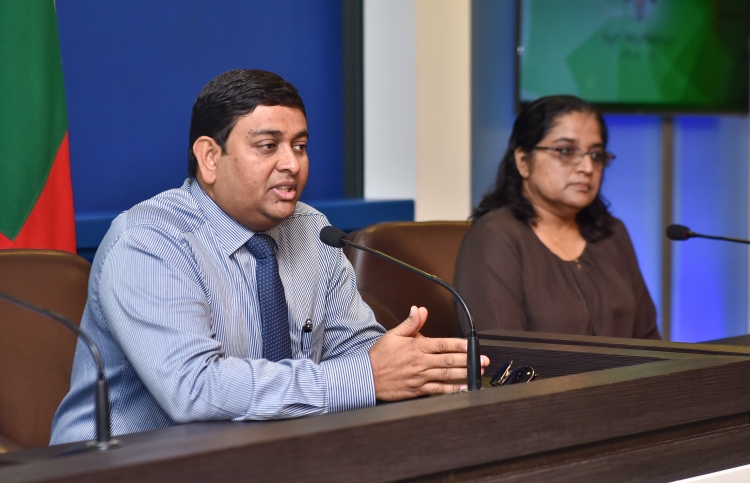 The Maldivian government has responded to the opposition’s counter to the president’s all-party talks invitation, by accusing them of “making up more baseless indictments against the government”.

Further, the state dismissed the opposition’s call to free their leaders, and maintained that the opposition leaders were sentenced lawfully.

President Abdulla Yameen last Wednesday, in an attempt to open dialogue with the opposition, invited all opposition parties to submit their suggestions and amendments for reform in writing.

The opposition responded on Monday urging the government to free the imprisoned political leaders, along with a list of reasons why they will not comply with the government’s invitation.

Speaking at a press conference held at the President’s Office on Tuesday, the state representative appointed by the president to administer the talks, Minister of Fisheries and Agriculture Dr Mohamed Shainee, denied all the accusations the opposition made against the ruling government. He said that they were just “excuses” made up by the opposition because they did not want to cooperate with the government.

Tamrat Samuel (L), senior advisor to the UN department of political affairs, meets with a government delegation regarding the all-party talks. PHOTO/TWITTER

The minister insisted that the government acts within the confines of the law, and that the opposition leaders were convicted because they were found guilty of crimes they were accused of, and that they have to take responsibility for it.

“[The opposition] is insisting that they won’t take part in the talks unless we free their leaders. So it’s not us who are being insincere – the opposition is trying to be coercive, and now everyone can see that,” Minister Shainee said.

Dr Shainee said that the president has guaranteed legal action against anyone – government officials and opposition members – that defy the law, and that he is upholding his promise. Therefore, the government will not show leniency towards any select individuals despite their stature in order to maintain law and order in the country.

“If the opposition specifies the exact articles and clauses in the Constitution that we’re breaching, we can be held accountable. Clearly, there are some different opinions going around – but that is why we are inviting them for the talks.”

When a journalist questioned Azima Shukoor about the opposition’s allegation regarding her involvement in influencing the judiciary, she remained mute and refused to comment.

Dr Shainee emphasised how the government is not interested in protecting certain political figures, but rather maintaining stability of the whole nation.

The fisheries minister concluded by saying that he is hopeful that the opposition will cooperate with the government, and said that the invitation will remain open indefinitely. However, he reiterated his earlier call not to place any prior conditions ahead of the talks, and said that being coercive and giving ultimatums to the government will not be an effective strategy for the opposition.

The opposition had called the president’s all party talks invitation a “cunning move” to deceive the international community that has been pressuring the Maldives as of late. They also alleged that the president was not sincere in his intent to hold the talks.

The opposition’s reasons why they were not willing to comply with the government include: the government’s blatant disregard for the Constitution, levying baseless charges against opposition leaders, asserting undue influence on state institutions and barring them from carrying out their duties, using excessive force to diffuse political rallies and forcefully diminishing the role of political parties in the country. It had also cited the deteriorating relations with one of the Maldives’ oldest and closest allies, India, as a reason for not complying with the talks. They also accused the government of overlooking regulations and procedures involved in leasing and selling Maldivian islands to foreign investors.

The opposition further alleged that the president is personally involved in mass corruption scandals, and noted that they do not want to be affiliated with corruption.